This marks my 100th post in documenting the construction of my CTA themed three rail O scale layout.

First off, I'd like to give thanks to all those who have not only been inspirational in building the layout but who have also acted as mentors and have become good friends. Without these fine folks none of my work would be possible.

Starting off, I'd like to thank my uncle Charlie King, who back in the late 1970's, gave me the April 1976 Model Railroader that had Eric Bronsky's (Eric, of course, will be thanked shortly) article "Farewell to the Old El".

My uncle Charlie has been a traction modeler as long as I could recall (and way before I was even born) and I often would see his layout of streetcar trackage during family gatherings. His stories of working for the CTA during the late fifties and early sixties were also quite entertaining and now more relevant as he has been able to provide first hand accounts of  being the motorman on a six car train of Baldies!

A true inspiration and mentor has been Ed Halstead. Ed has acted as a mentor as I've attempted to improve my modeling skills and has offered invaluable assistance in the creation of the 4000 series Baldie model. Ed's modeling skills are second to none, and he has been the primary inspiration for me to always work towards improving my modeling skills. He sets an incredibly high standard, and while I am no where near his level of skill and knowledge, it has been a pleasure trying to learn those skills.When I visited Ed's layout for the first time I was absolutely amazed at everything ... the presentation and the models are outstanding.


And, if you do not already do so, be sure to follow Ed's blog at Modeling Insull's Empire in O Scale (a link is also on the right side of this webpage for the blogs I follow). I learn something from every one of Ed's posts.

I would like to also thank Eric Bronsky who has also acted as an inspiration and has offered extensive modeling advice. Eric's MR article started my life long fascination with Chicago Elevated and all the various lines and cars that ran on the L.

I have collected all of Eric's traction articles from Model Railroader and his examples of L structure have been my inspiration to always try and improve my structure. In addition, Eric's column Insull's Smaller Empire in the Shore Line Interurban Historical Society's magazine First and Fastest has been a constant inspiration, especially during those years when I was strictly an arm chair modeler. Eric was especially kind enough to feature my layout in the Winter 2012 issue.

A tremendous source of knowledge for all things Chicago transit related has been Bruce Moffat. Bruce has been fantastic in offering assistance and research materials in all of my modeling efforts but especially with the 3D printed 4000 series Baldie. Without Bruce's help, there is no way I would've been able to complete that car.

Bruce's knowledge of all things transit related knows no bounds. I highly recommend both of his Dispatches that have been published by the Shore Line Interurban Historical Society, Dispatch No. 5, The Chicago 'L's" Great Steel Fleet - The Baldies and Dispatch No. Cooperation Moves the Public both are a must have. 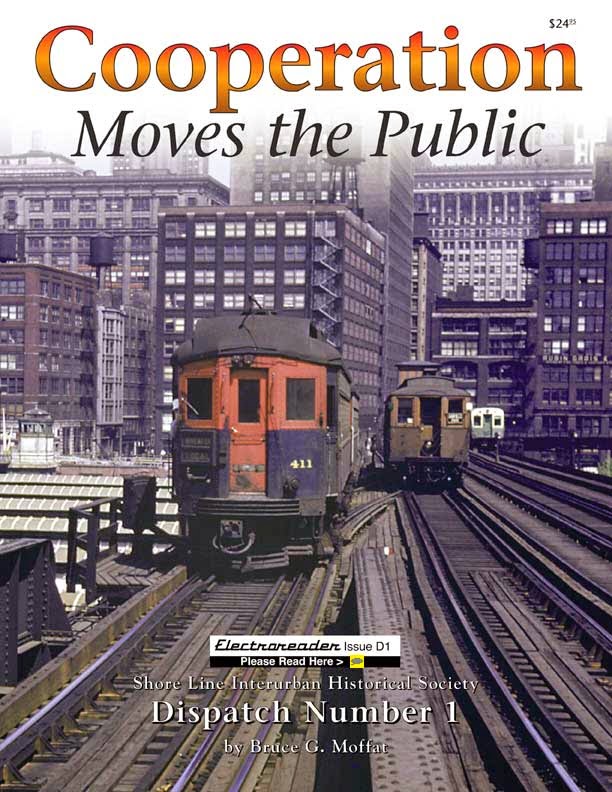 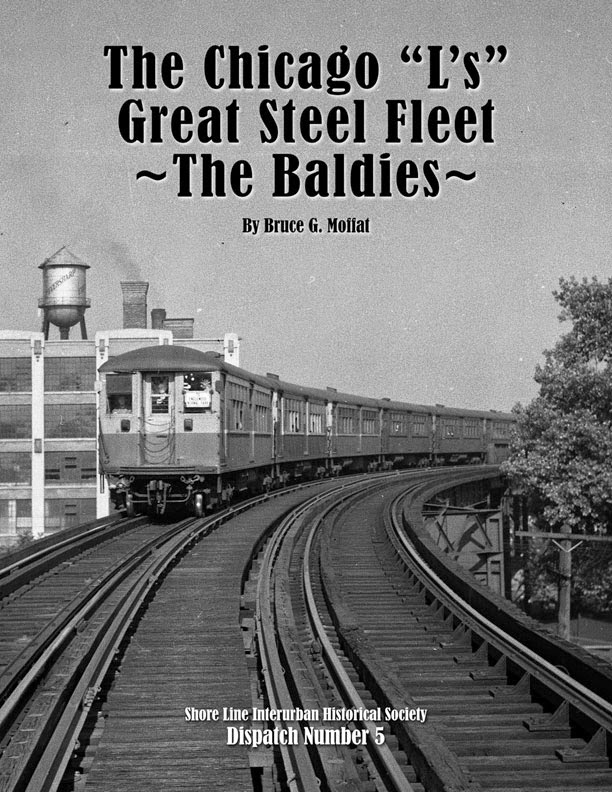 In addition to his publications, Bruce has been kind enough to let me ride behind his large scale Baldie ... a true treat for a self proclaimed Baldie fan!

Another fantastic person I have to thank is Terrell Colson. Terrell has been fantastic in hosting Trolley Night gatherings that have enabled me to meet even more fantastic modelers. Terrell has also been a great source of modeling knowledge and expertise. He has been kind enough to share a tremendous amount of knowledge and material with me that has and will aid my modeling skills for years to come. A brief video of some shots of Terrell's latest Trolley gathering can be seen on my YouTube channel Terrell's 2015 Trolley Night:

Terrell is a fantastic host (and also a great modeler!) and I always greatly enjoy his gatherings.

I would also like to thank everyone that I haven't mentioned specifically by name. Some I've met through this blog and others I've met through the various meets and trolley gatherings. Its been great sharing and gaining knowledge with all.

And lastly I would like to thank all you who take the time to read this blog. I don't post as nearly as often as I should, but it does keep me motivated to attempt to make progress on the layout! Thanks to all for participation in the traction hobby!

I've always been involved in some form of model railroading as long as I can recall. But, it has only been since the last ten or so years that I started seriously modeling traction, specifically Chicago elevated. Previously I either lacked the skills, time, space or funds to actively model Chicago transit.

I dabbled briefly in HO, working on some HO resin kits.Painting at the time was not my strongest skill. And, with bad eyesight, HO was a little too small for me.

This all changed around 2007 with the acquisition of an un-powered set of MTH 3200's and a short stretch of elevated structure built out of balsa wood (definitely NOT the preferred material for construction!).


I at least saw the potential of using the MTH 3200's for the basis of a layout and construction started on a shelf style layout.

Several versions of elevated structure construction was tried before I came up with a satisfactory version.


After a few more revisions, the final method of construction was finalized: 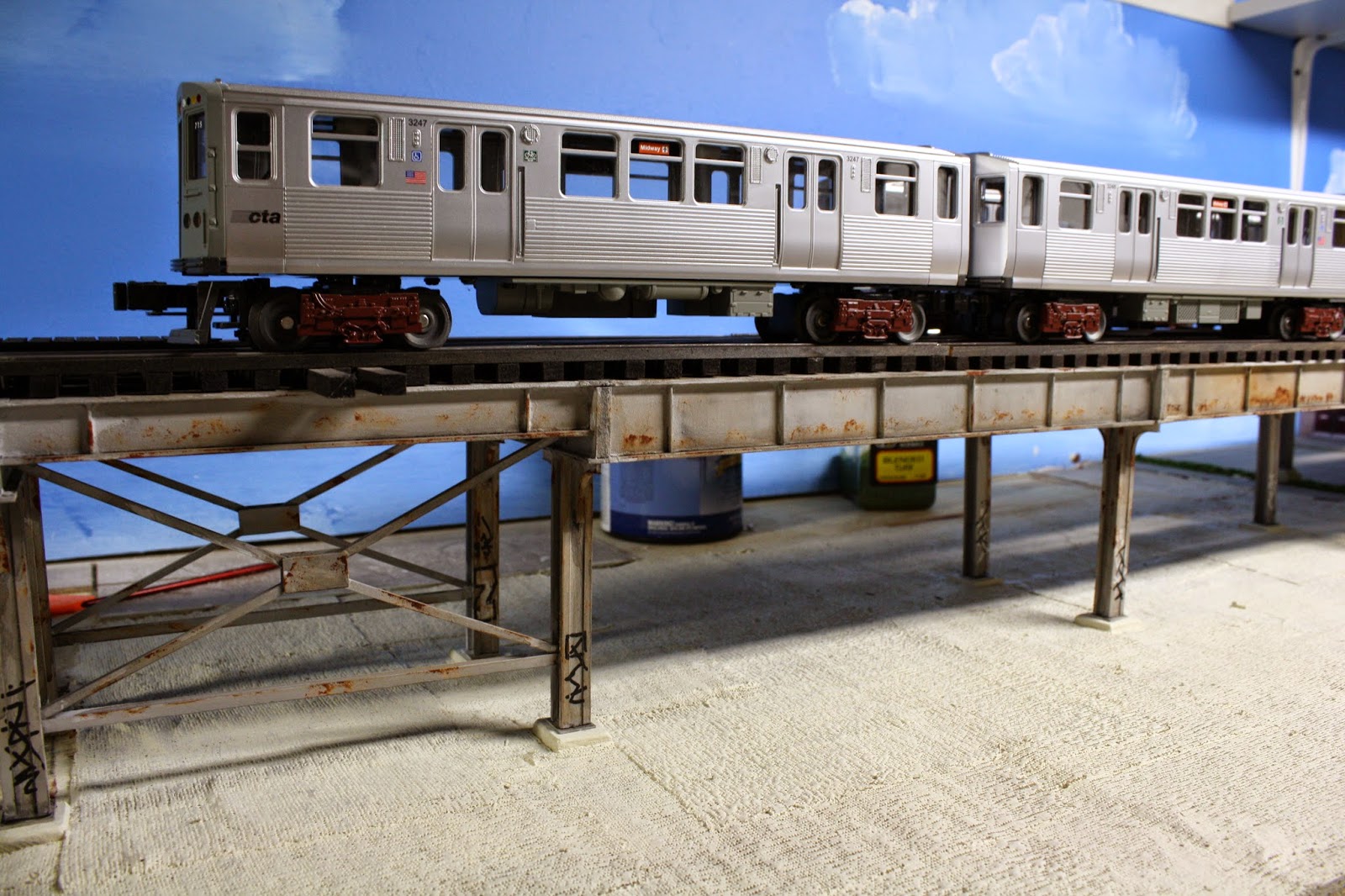 A corner was finally turned in April 2011 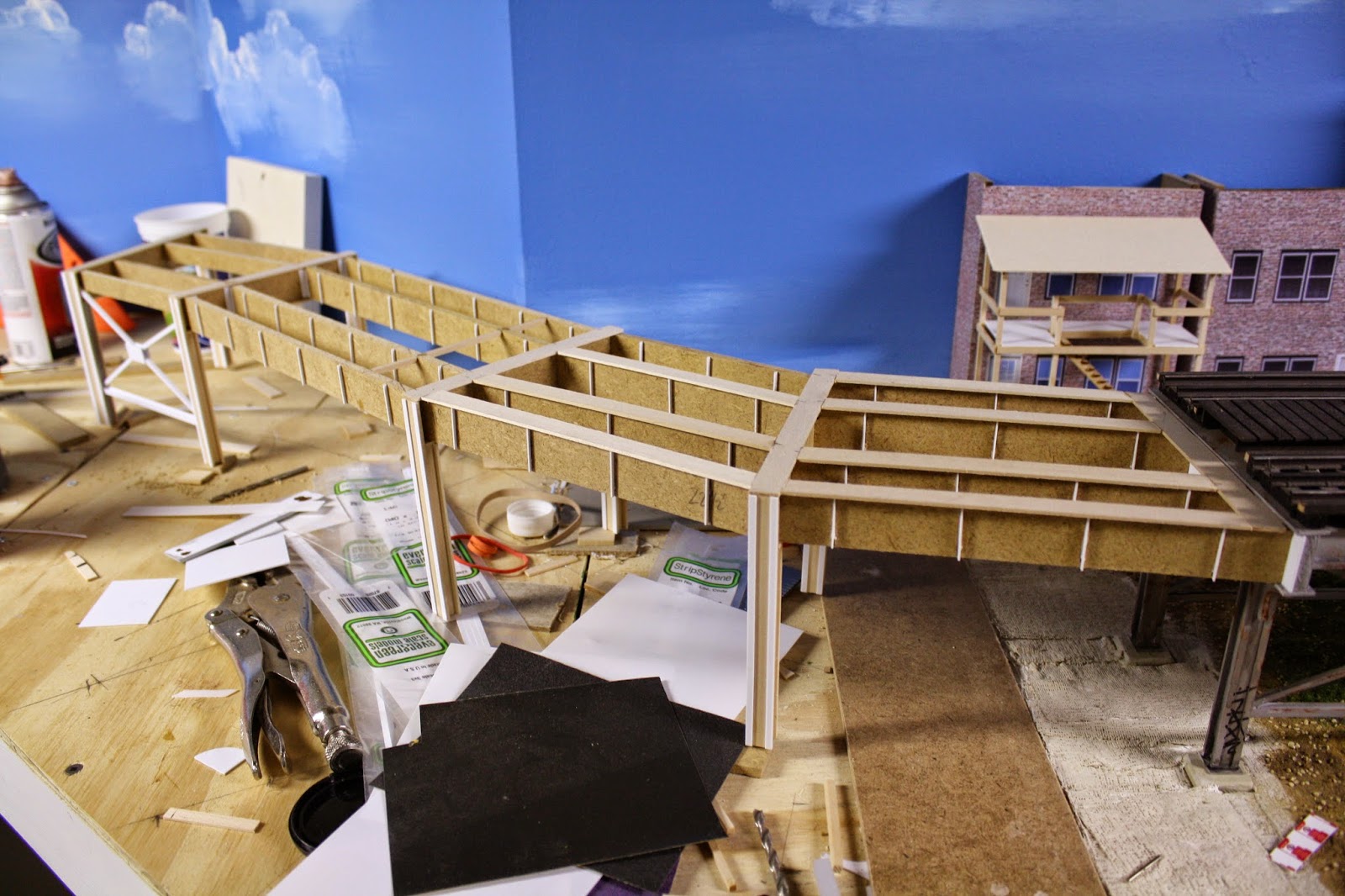 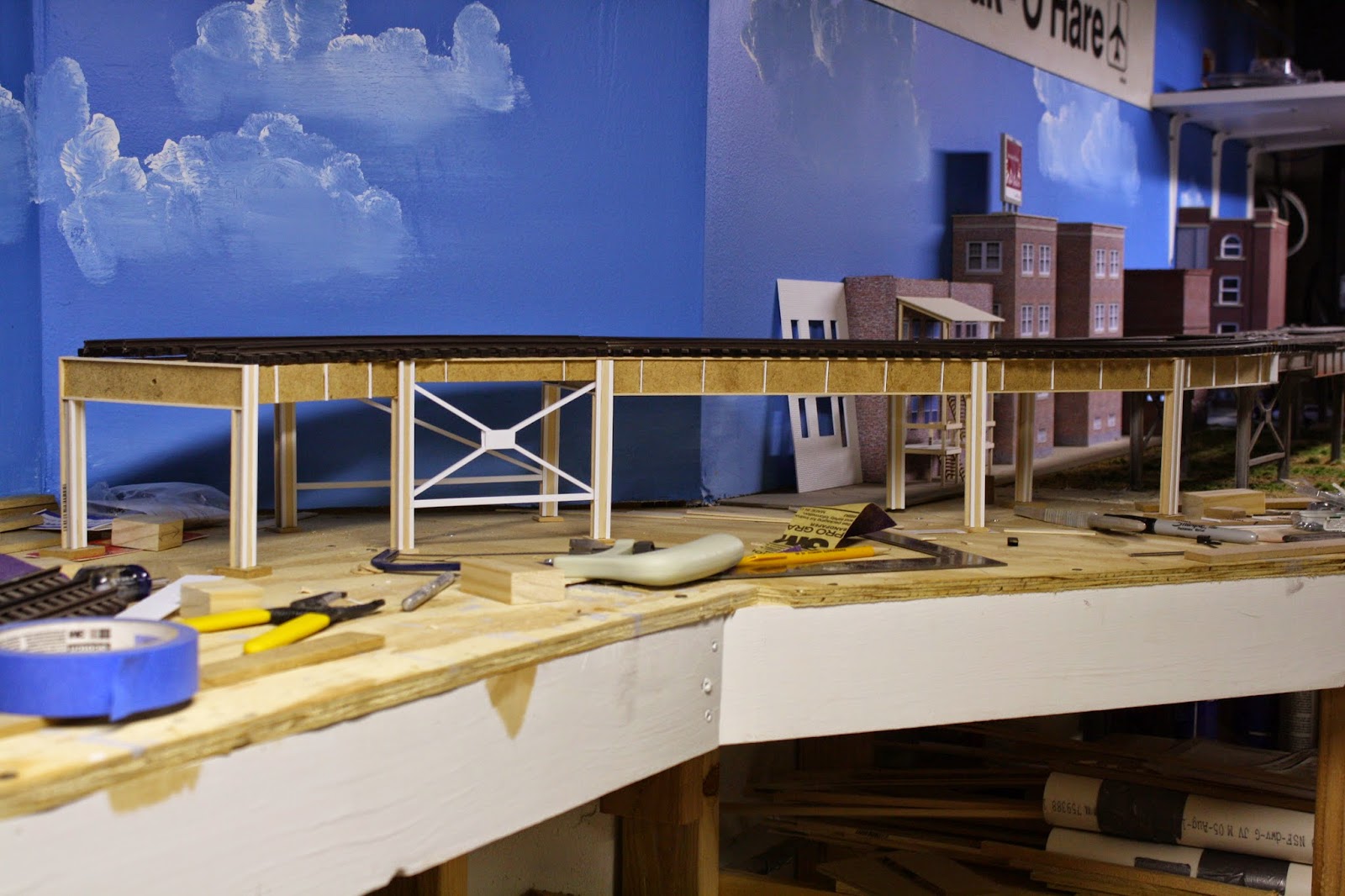 Followed by another in December 2011 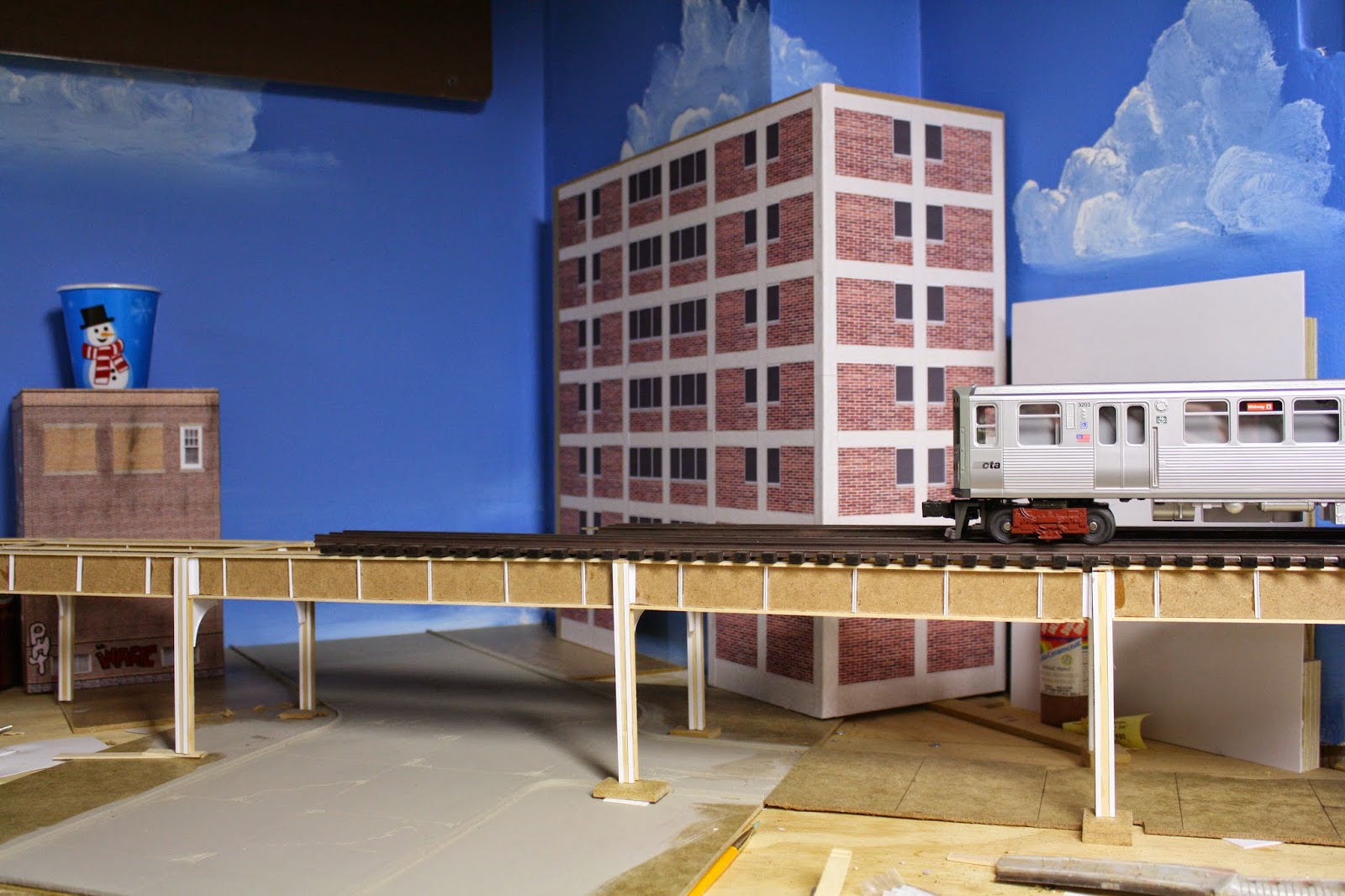 In 2012 the residents of the layout had a park added 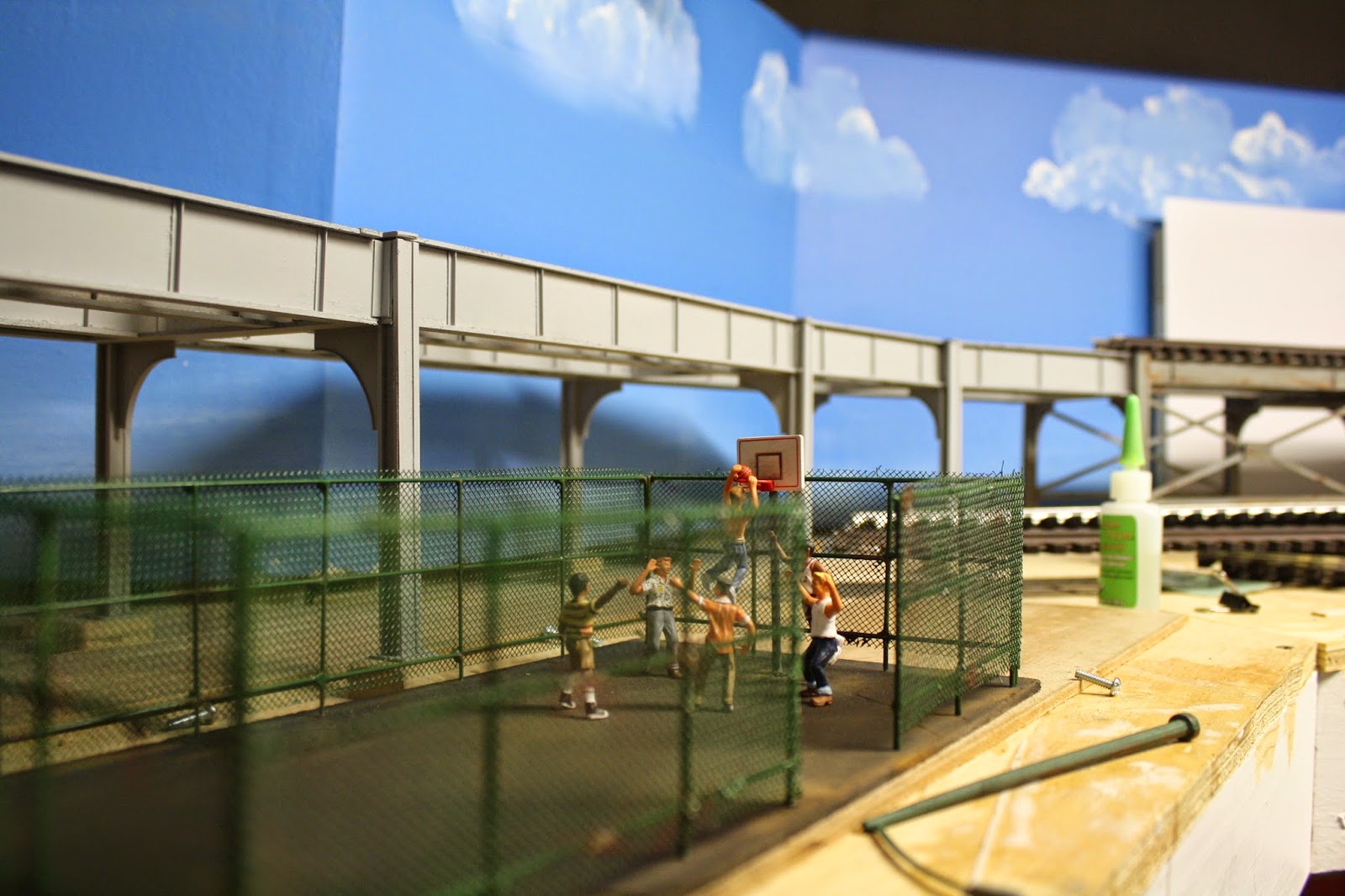 And in mid 2012 the residential area was progressing nicely:

And work started on the Southport Station: 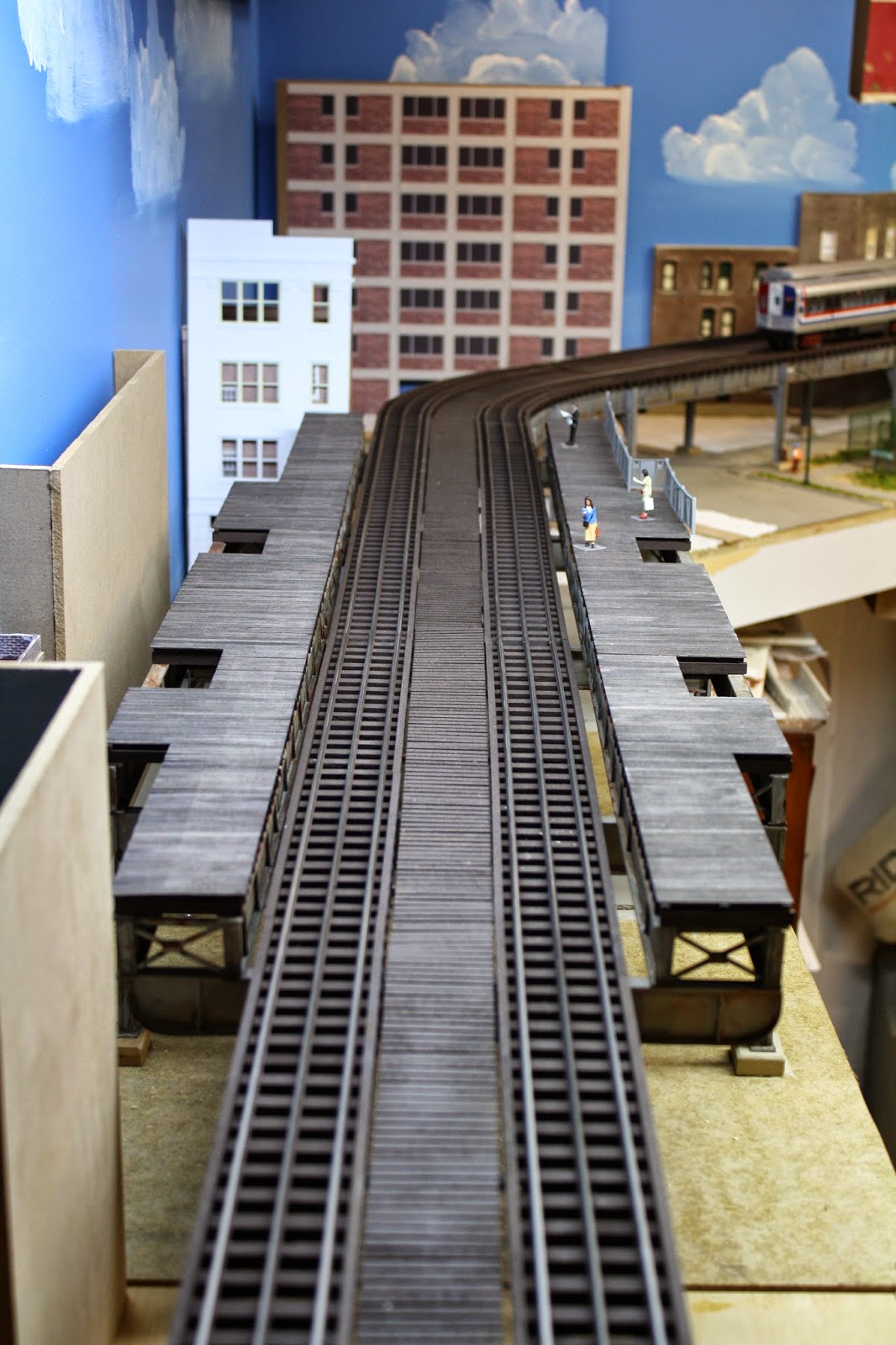 2013 was a slow year due to home renovations, but some work was done at the Southport Station, if slowly (and still not finished). 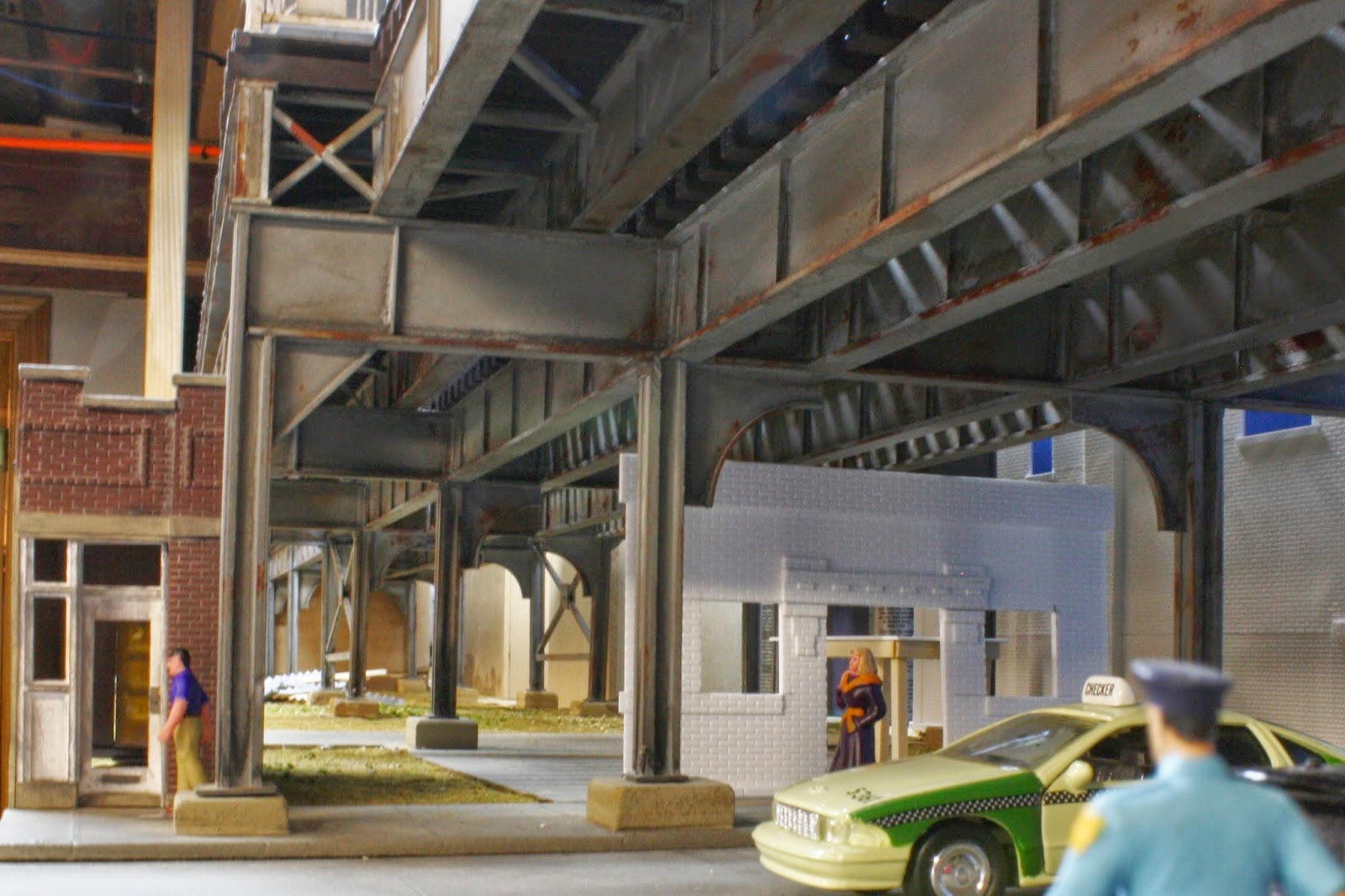 I did start learning to cast my own more detailed L structure: 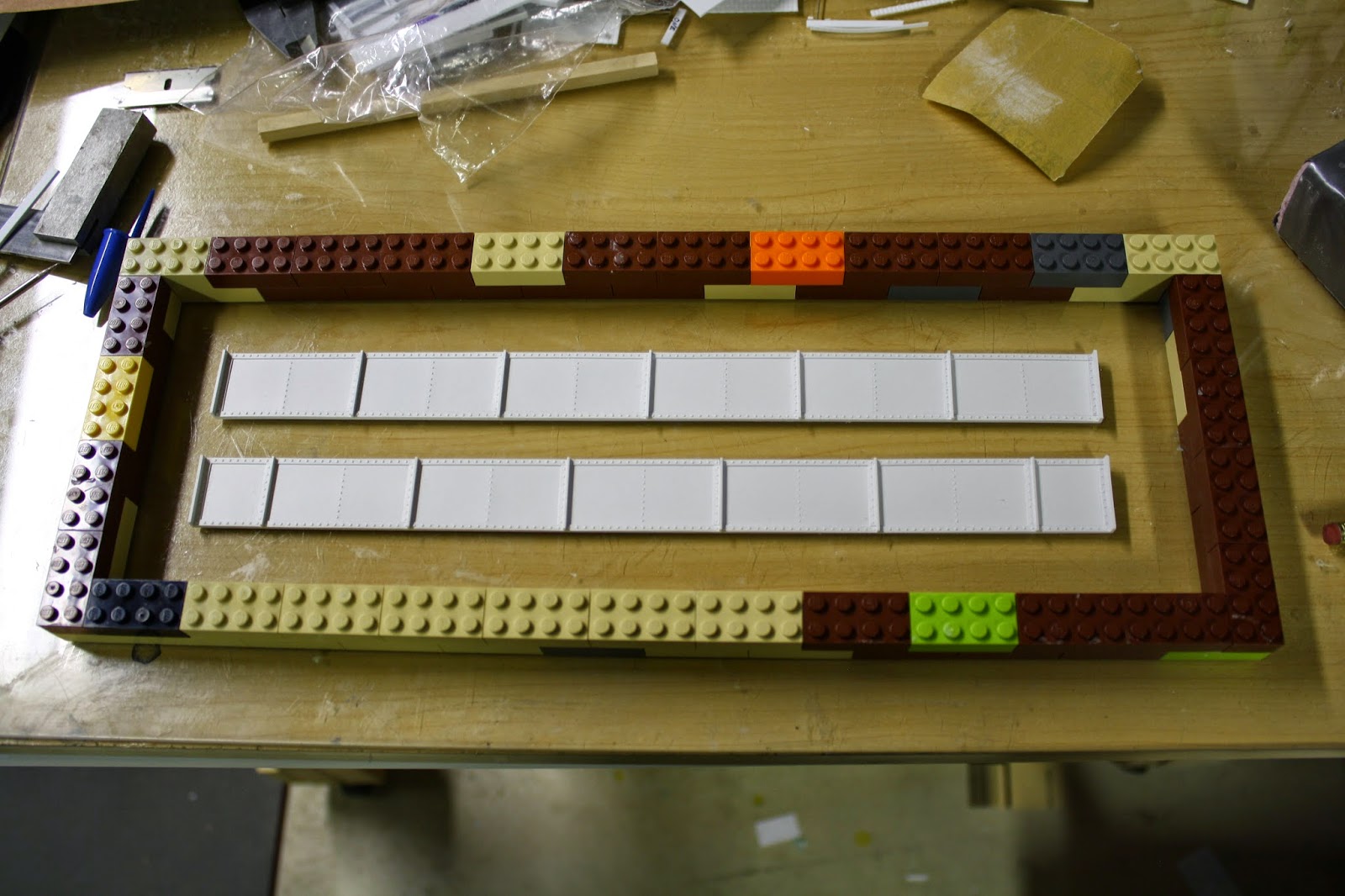 But somethings were finished: 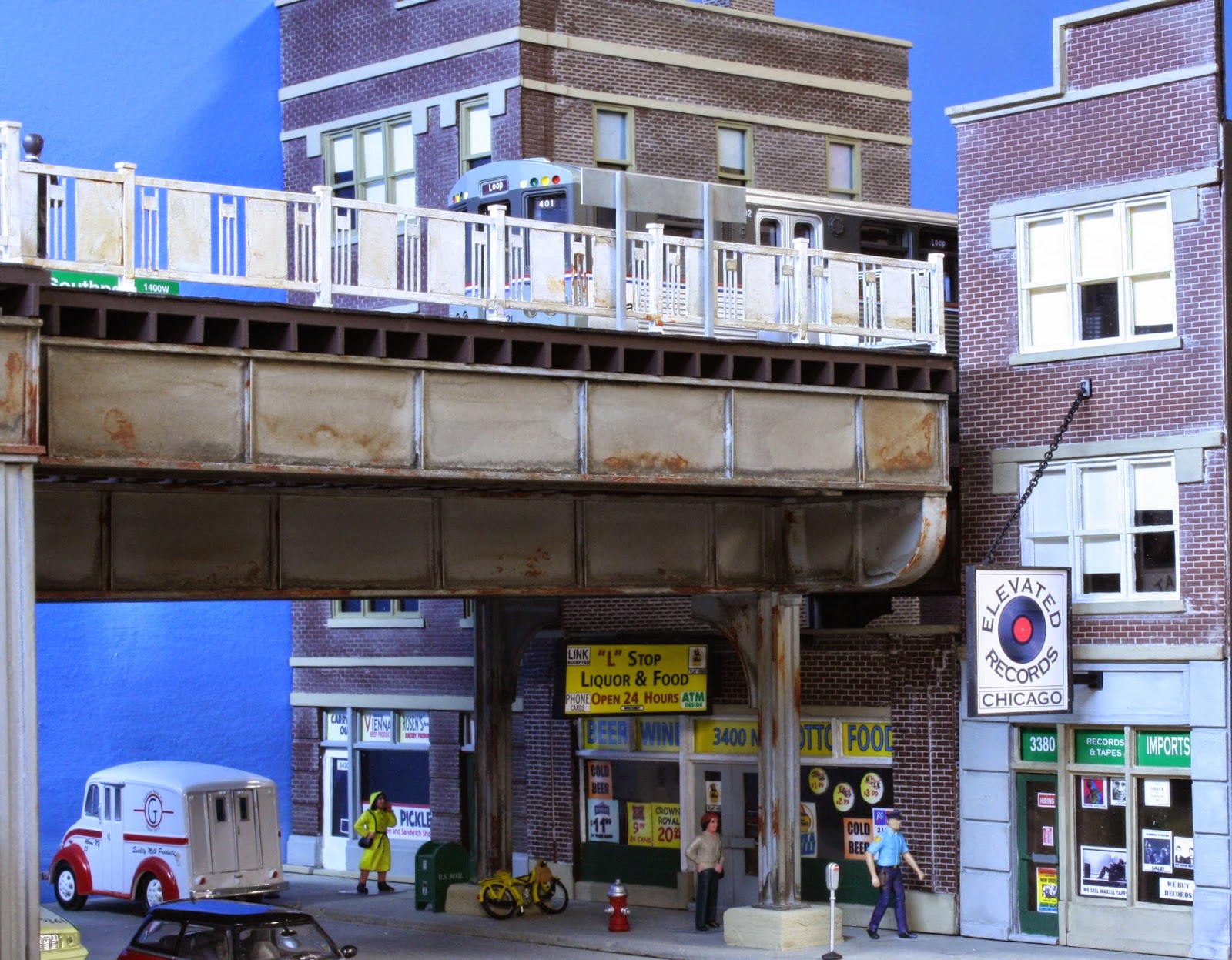 2014 saw the introduction of the fuse box curve:

And the start of the adventure into 3D printing and the creation of the 3D printed Baldie model. 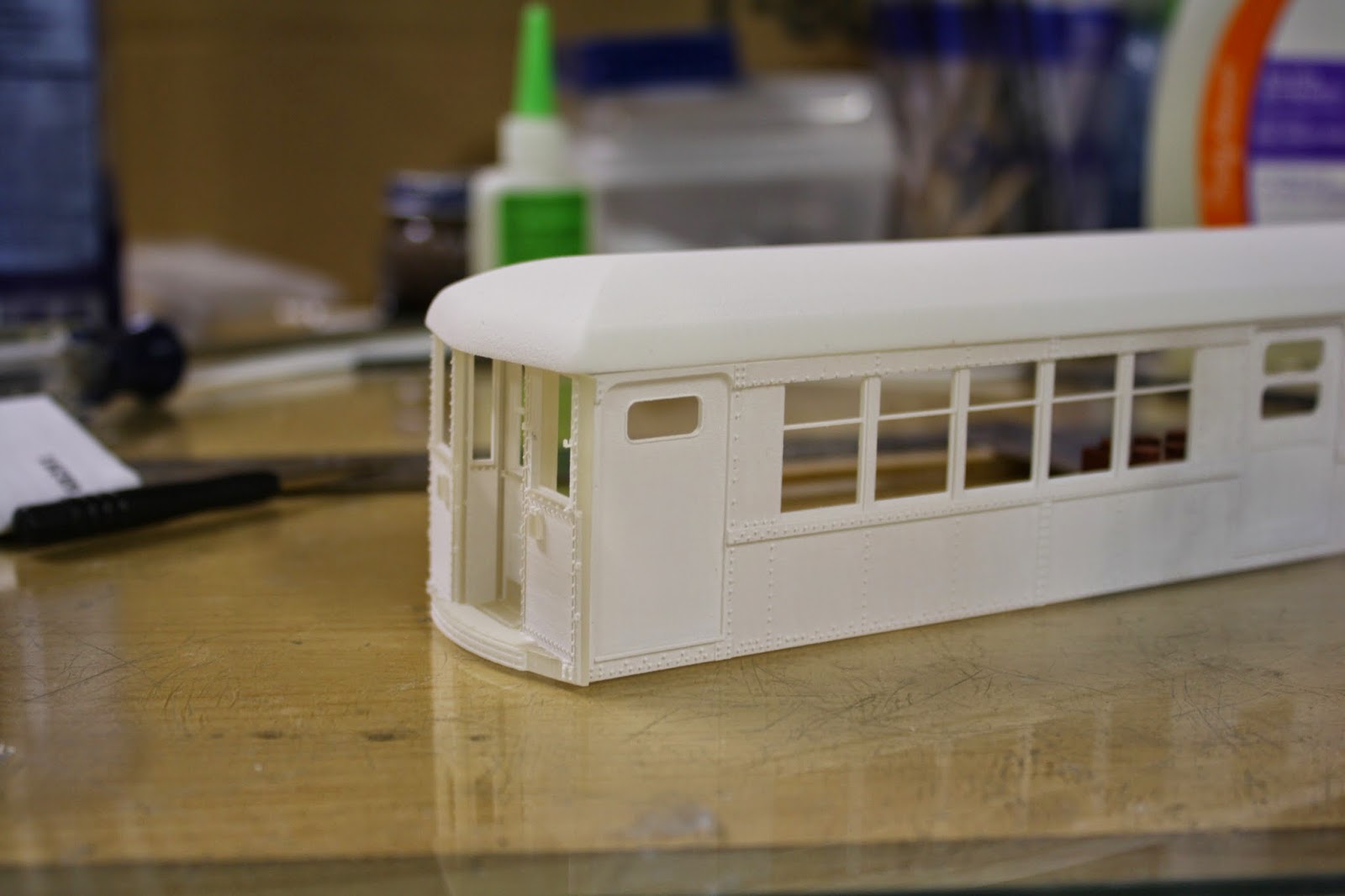 For which a prototype was finished: 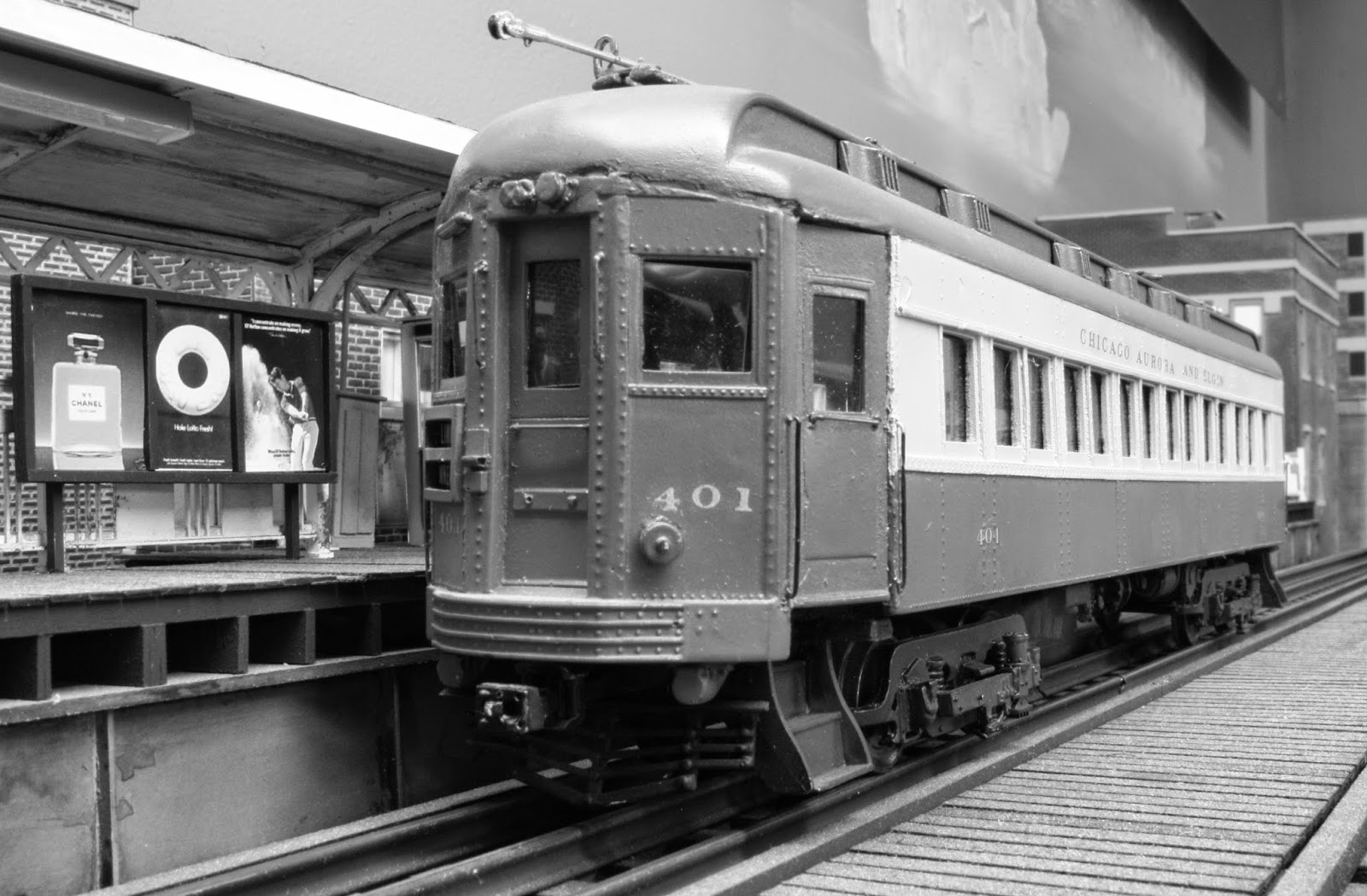 And the Baldie was finally finished (version 2.0):

In review, its been a fun few years!

Thanks again for viewing the blog, and hopefully the 200th post will come quickly and with much more progress.
Posted by CTA Fan at 8:06 PM