A tool recommendation and a themed weekend of truck mounting

With some of the older Wagner, Q-Car and Current Line power trucks I have requiring that holes be cut in the floor of the model, I've been unsure as to the best way of accomplishing this task. This was really delaying the progress of my three CSL street cars and my two 4000 series Q-Car Plushie models.

So, I acquired a Rockwell BladeRunner, which is basically an upside down mounted jig saw that incorporates a table with a miter slot and guide fence. I thought that this might be a little more versatile than a scroll saw in that it could possibly cut more materials (especially metal).

For $100, I am actually very happy in how it performs. After drilling a hole for the saw blade, cutting the holes for the motor is a breeze. I "free-handed" the above hole, but could have used the fence for a more straight cut.

With one floor done so quickly ... things quickly spiraled out of control! With one car done, I decided to work on the CSL MU car and got that car's trucks mounted:

Luckily I had the CSL Plan book so I was able to accurate space the trucks as for these two cars the floor is wood with no locating holes. Both of these cars have Q-Car power trucks.

Once these two were done, my zombie Q-Car Plushie (the one that had previously been smashed and I put back together) was up next. For this car, it is using an older Wagner set of trucks but with a Q-Car bolster on the un-powered truck. A new floor was cut from plywood as the original wood floor was warped. I used the same Rockwell BladeRunner to cut the floor...which was much easier than dragging out the table saw!

I use styrene to build up around the hole for the required spacing for the motor. 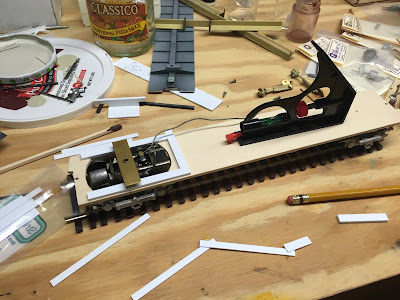 I prefer to use styrene as its easy to cut and glue, and well basically its what I had on hand. A few layers are build up until the floor is level and a box is made around the hole. Holes are then drilled and tapped into the styrene and the motor is mounted. 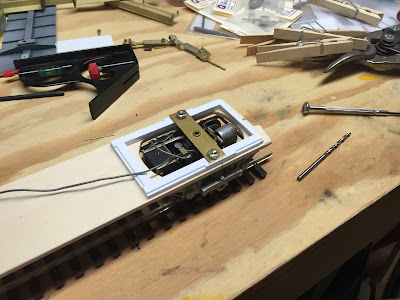 A couple of notes: stryene may not be the best for longevity for drilling and tapping as it is a relatively soft material. Care must be taken when attaching the screws as to not strip the threads. But, it works for me. If it ever strips out, I can tap to larger screw or add a brass sleeve. Also, I ran out of shorter 2/56 screws so I had to add "spacer" nuts. I later glued sheet styrene across the top of the motor to make a closed box.

Before anything was glued, I did test the car through my tightest turn and no clearance issues!


With trucks mounded on three models, I decided to tackle a problem I've been avoiding for some time ...

My Q-Car CSL Pullman came with a white metal cast floor that had a slight bend to it. When I initially took the floor off, it snapped in half! Curses I thought. I did try to make a wood floor, but before completing that, I figured I would see what could be done with the metal floor as it was nicely detailed and had mounting locations for the trucks.

For this car, I have a Current Line power truck that will require a hole be cut in the floor.

Luckily the new saw (with a metal cutting blade) made easy work of cutting the hole. The floor being in two halves also make cutting the hole very easy as the part was easy to manage on the saw ... an unexpected bonus.

I figured I could use a piece of 18 gauge sheet metal (left over from my days of restoring rusty British sports cars ... you know they are rusty when you by your patch sheet metal in 4 x 8 sheets, a truly bad sign) as a splice and epoxy the two halves back together. I used this for strength ... and since I didn't have any brass sheet on hand.


I used 5 minute epoxy to glue everything together, and once dried, I was rather happy with the result. The splice seems to hold nicely.

With the floor back in one piece, I was able to mount the Current Line truck. Luckily the brass bolster was removable which made drilling the holes much easier. Again, I was out of short 2-56 screws so I had to use spacers from nuts. But, it works! Again,for ease of use and as it was what I had on hand (and my material of choice) I used styrene to mount the truck. I will enclose the hole with a box later.


Finally all three CSL cars have their trucks mounted!

First, a Happy New Year to all!

Since resolutions are all the rage this time of year I've decided to try to set some layout goals / resolutions for the New Year! I unfortunately too many projects ... but its nice to try to at least set some goals. 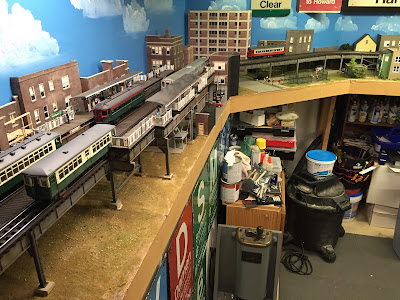 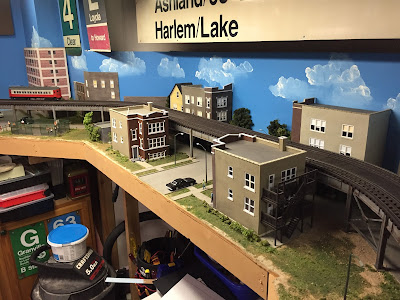 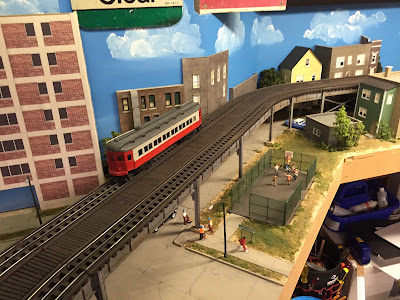 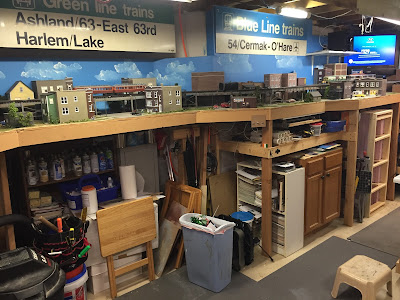 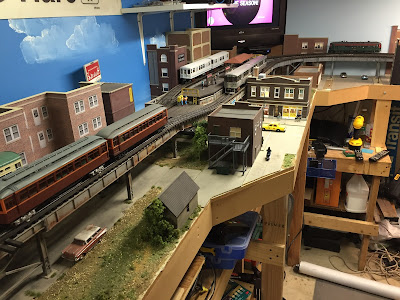 There really hasn't been much improvement over the last year, just some small detailing and refinements.

This should be an easy goal as I've got most of the plans and techniques down. I would like to invest in some better casting tools (vacuum chamber and pressure pot), but those can be leveraged for use in other projects.

This is an area I've really been slacking. I seem to take forever in finishing a car model. Some of the projects I need to finish are:

A slew of CSL models, one North Shore wood car (that will be repainted in CA&E colors) and a 4000 series CTA plushie (who knows what will happen with the 3D printed baldie prototype):


I have almost everything to finish these models except motivation!

I HAVE actually made progress on the Northwestern motor car. The paint is about 90% done and the trucks have been mounted.

My 2000 series CTA cars still languish in an unpainted state. I need to resume this project and get these cars finished.

The car on the left will be an un-powered trailer. The biggest delay has been attempting to paint match this to other cars ... with little to no luck.

While I have been successful in getting two complete 3D printed O scale cars built, the process hasn't been entirely painless or as effortless as I'd like.

I've had some quality issues with Shapeways, and due to the cost of the parts, I haven't continued building additional 3D printed cars.

I do, however, have several almost completed 3D models of cars that I'm hoping to print this year. However, knowing the limitations of the 3D printing process along with the costs and quality control issues, I've decided to take a slightly different approach for my next cars.


In addition to the above points, I really need to write a synopsis of the whole 3D printing experience. I hope to accomplish this in a series of future posts. I still believe that the process can greatly aid in the creation of O scale models. However, its more of an additional tool to use rather than a magical process that can create a ready to roll product.

Add additional lighting and interior details to the layout

Over the past few months I've begun experimenting with adding interior details and additional lighting to the layout. I'd like to add interiors to most of my foreground buildings and attempt to illuminate most of the others.

Some of these lighting efforts have been detailed in prior posts but I've recently begun to illuminate some of the buildings underneath my Southport Station. 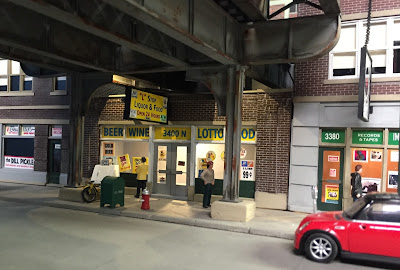 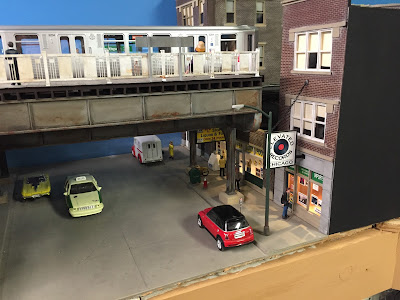 In addition to adding interior lighting, I've also begun experimenting with adding nano LED's under the L structure to help illuminate the scene a little better. Right now the LED's are just placed between the girders, but I'm going to look for some O scale light fixtures that I can attach the LED's to. I do like the effect as it just brightens the scene.

Continue posting frequently to the blog

Looking back at 2015, I did manage to create 32 posts to the blog. I would like to top this number for 2016 as the blog does act as a driving force to accomplish goals and projects on the layout.

And a long shot goal ... start the newest expansion of the layout!

What currently acts as a "catch all" shelf is supposed to be an expansion of the layout to an elevated terminal. 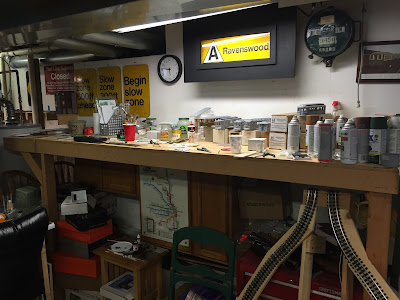 I would like to put an elevated terminal with a small shop and yard (based loosely off of the now demolished Logan Square terminal) or the also demolished Wells Street terminal. Either one is a tight fit, but who says you can't make big plans?

Thanks again for reading and hope you have a successful 2016!
Posted by CTA Fan at 3:10 PM No comments: