Merry Christmas and Happy Holidays to all! 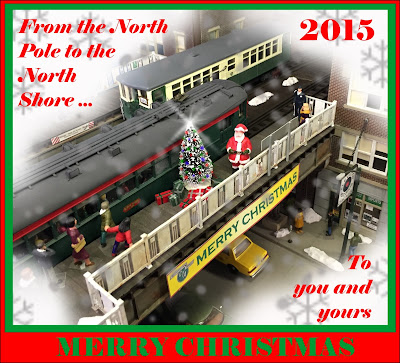 And, from prior years: 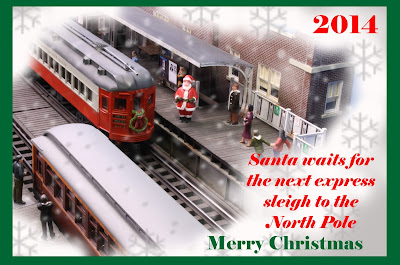 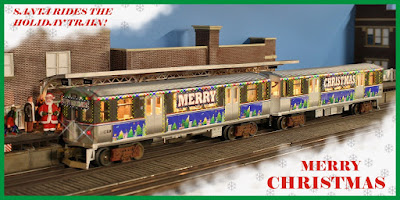 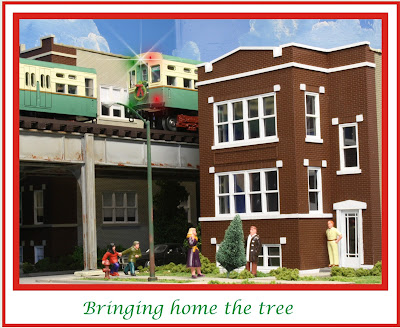 With the holiday season in full swing, time to work on the various layout projects has diminished. However, I've managed to make some small steps forward ...

First off, I've revamped some of the lighting on the new currency exchange building. I will be adding detailed interiors to the second floor of this building, but until I can finish that, I've added some window signs and some frosted paper behind to block the view. 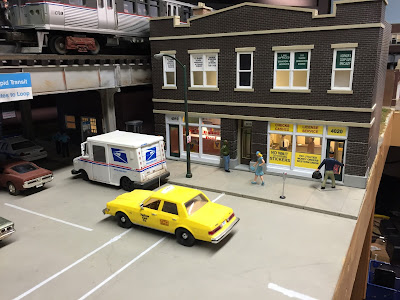 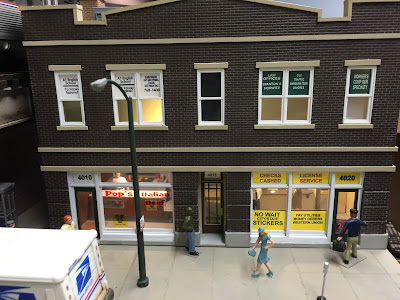 I'm using Woodland Scenics' LED lighting kit to light this (and the station house for the Sheridan Road station) building. It's somewhat pricey, but very easy to install and being able to dim each light is nice.

Further down the line at the Sheridan Road curve, I've added some additional details to the apartment buildings there. 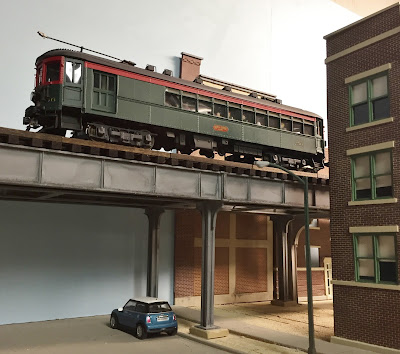 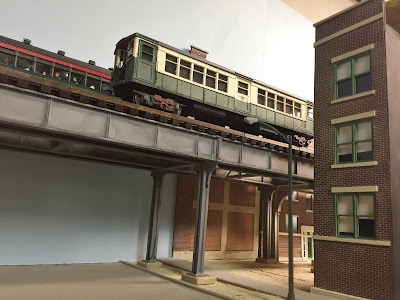 I still need to add ground cover in the above scenes ... but at least the buildings are mostly done.

I've also glued in the windows to the apartment building and added glazing and some shades. 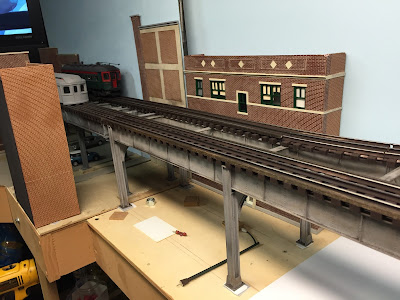 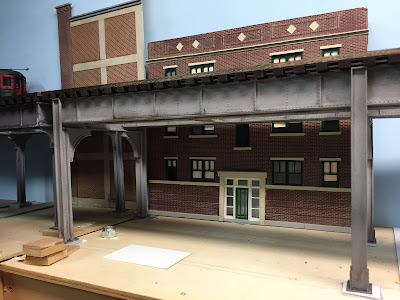 This is really supposed to be a building on a main street, but it does fit here. I guess it was just poor planning on the part of the developer to face the facade of the building right onto the elevated tracks. Best that you keep the windows closed in the summer.

The reinforced concrete brick structure behind the station has been finished to a point where it can be put back on the layout: 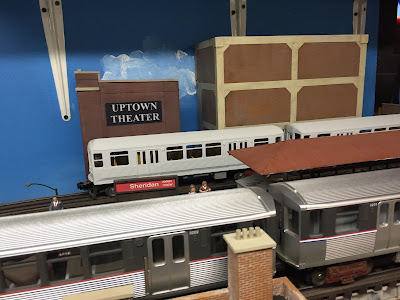 I'll be adding some signs to the side of the building to break up the large expanse of brick.

In the car shops, the trucks have finally been placed under the Northwestern motor that I finished painting (well almost, still need to add the black to the anti-climbers) last month. Its slow but steady progress. 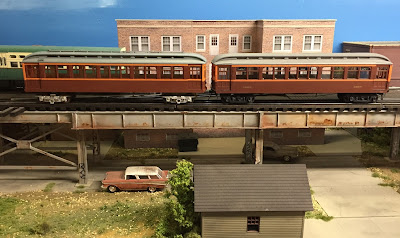 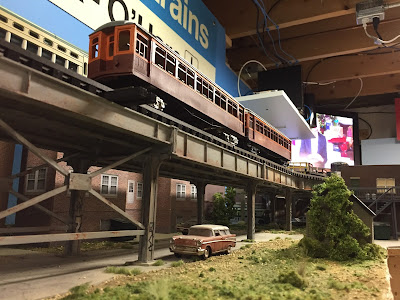 I also got semi-ambitious and decided to clear the cobwebs from underneath the structure. I have to do this from time to time as it does take on the look of a haunted house after some time. 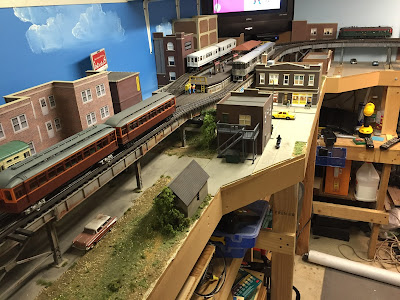 And lastly, I tried to slip my Iphone onto the Southport Station platform, and using the front facing camera, take a few photos. Its harder than it sounds as you can't really see what you are taking ... but a few turned out ok. 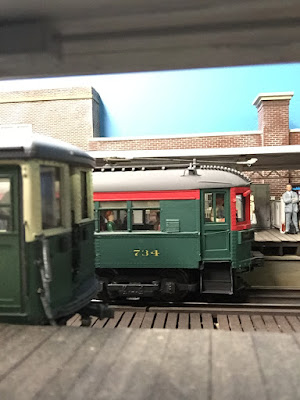 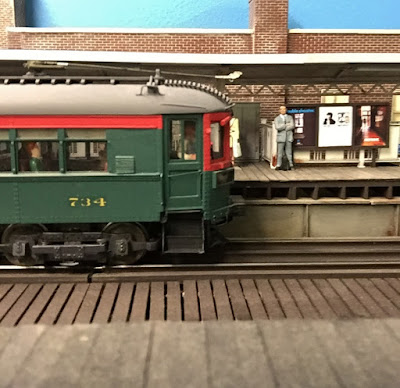 With the holiday season in full swing and all the obligations that come with that, modeling on the layout has slowed somewhat. However, I decided to work on a few different things ...

Behind my Sheridan Road station and behind the Uptown Theater (my very simplified version that is wayyyy out of place) I had a cardboard / paper mock up of a building. I've decided to replace this with a more realistic structure. I've decided to model a concrete reinforced brick building. 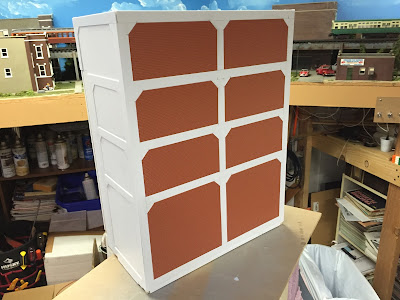 This being O scale, this is a rather large structure (18" high by 12" wide by about 6" deep). By making the building concrete reinforced, I can minimize the amount of brick sheeting to use and eliminate any joints in the brick.

And, as this is so large, I decided to make the core of the building out of some scrap 3/8" plywood I had laying around: 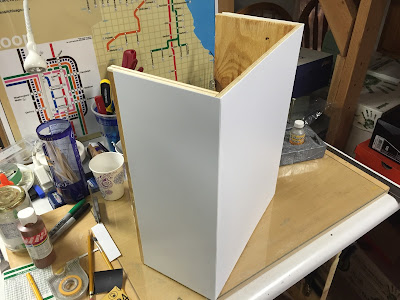 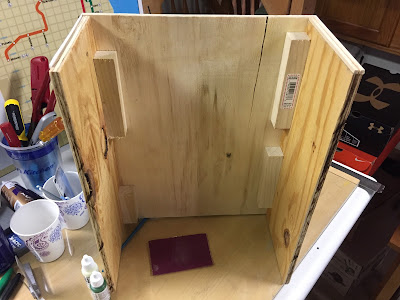 This will prevent any warping as the size is rather large! I may leave the roof of the building off as I am thinking of hiding some home electronics equipment (cable modem, router and home network switch) inside as these currently reside on a shelf above the station.

Styrene strips were cut to make the concrete reinforcements using the score and snap method. Once one was cut, it was used as a template for the other sections. 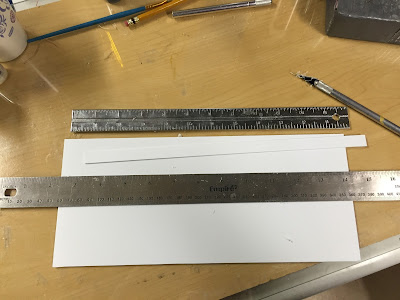 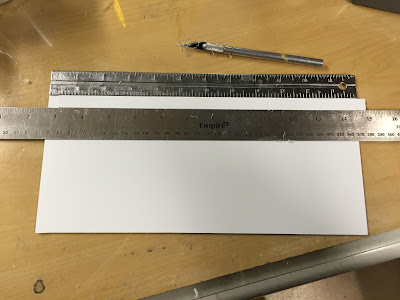 For these larger buildings that typically reside in the background, I am continuing to use the brick sheets offered by JTT Architectural Detail Parts. You get two 7.5" 12" sheets for approx. $6.50. The detail is good and the bricks take mortar very nicely. 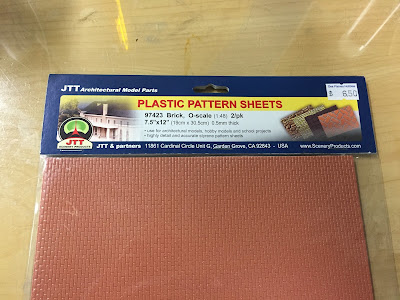 For foreground buildings I will still use the brick sheets from N Scale Architect as the quality is better and the consistency of their bricks makes stacking (for added brick details) much easier. The cost, however, is more than double so that is why I try to use these less expensive sheets for background buildings.

To attach the sheet stryene to the plywood core I used 3M spray adhesive which seemed to hold very well. The styrene "concrete reinforcements" have been added to this styrene base: 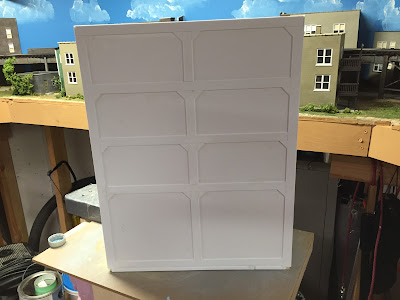 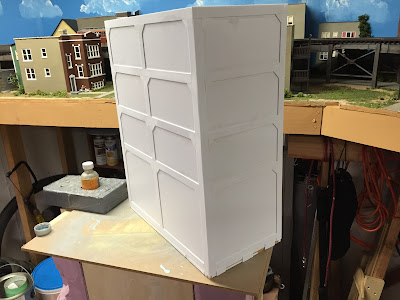 As for details, my philosophy so far has been to keep time consuming details to a minimum so that I can build somewhat faster. At this point, I'd rather get multiple buildings built, rather spend all my time super detailing one structure at the expense of overall layout progress. I feel that as time progresses, I can always return to these structures and then add more details. But, in the meantime, they can act as adequate background buildings.

And ... as the title of this post states ... don't also give up on either stalled or less than perfect projects. They can often be saved or recycled!

Over two years ago I began construction on an apartment building that was supposed to be placed on my Sheridan curve module. I made the building from N Scale Architect brick sheeting (so a decent investment in modeling funds) and attempted to add as much detail as possible to the structure ... 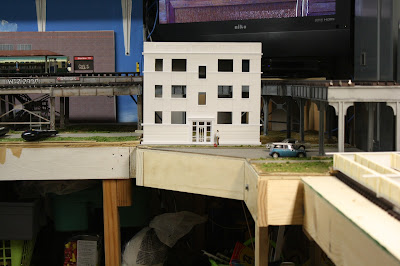 I initially built the structure as just a flat with about 1" of depth on the sides. All details were added before painting (this is an important note!).

But, alas ... there were a few problems that stalled this structure and almost sent it to the dumpster ...


So, having the above issues, the building was removed and almost thrown away. But, like any good model railroader, I really can't throw anything away (luckily).

Over two years passed, and having the new elevated extension I decided to attempt to "resurrect" the building. I figured I spent too much time and money to just throw it away.

So ... last few weeks I have finished painting it and started adding the windows: 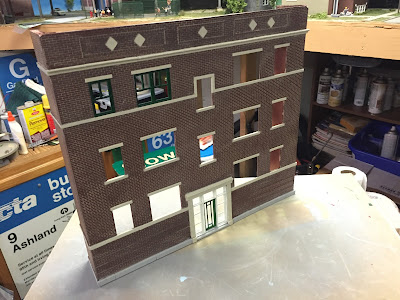 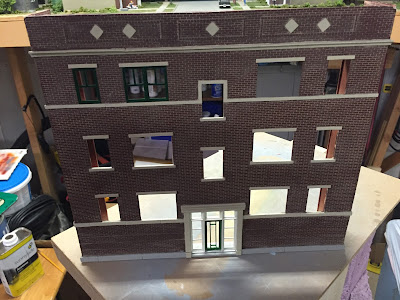 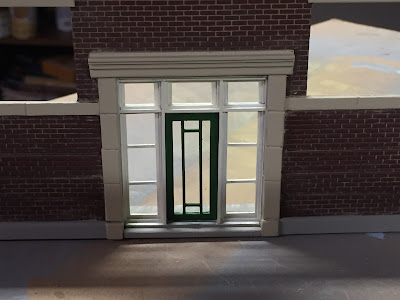 I still need to add additional top cornice details, but I can add and paint that separately.

But with any project, I always try to learn things and especially from mistakes. Some items I learned from this project are:


So, once almost thrown away, the apartment building is now a background building for my newest L extension... 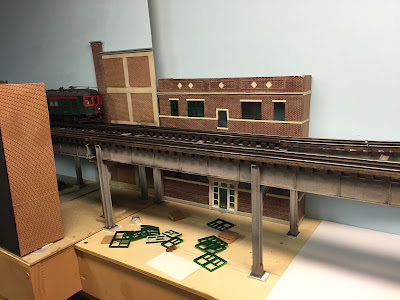 Who knows ... I may even add some interior lighting! Arisen from the ashes, so to speak.
Posted by CTA Fan at 9:39 AM 1 comment: