Why nothing ever seems to get done ... or maybe project management issues?

Recently there was a post on the Facebook Traction modeler's group asking the question of who has multiple projects going at one time. That question made me think of all the projects I am working on simultaneously. I didn't realize how many things I've been working on so I decided to catalog them.

These are the "major" layout related projects that I currently have "in the queue".

1) In the following picture, there are at least six projects that I still need to finish: 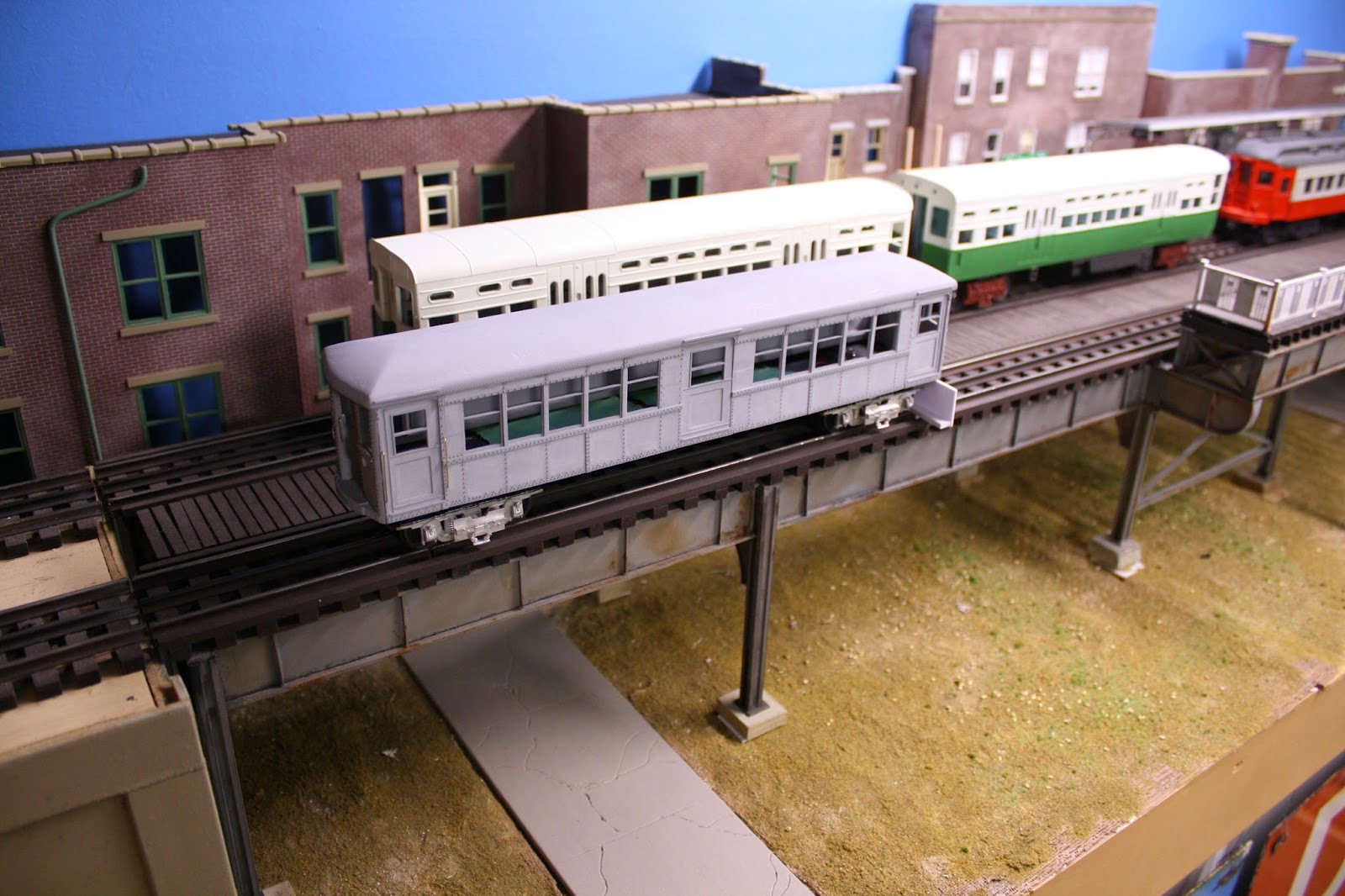 2) The stairs to the Southport station need to be finished. Below is just a mock up of the eventual stairs. 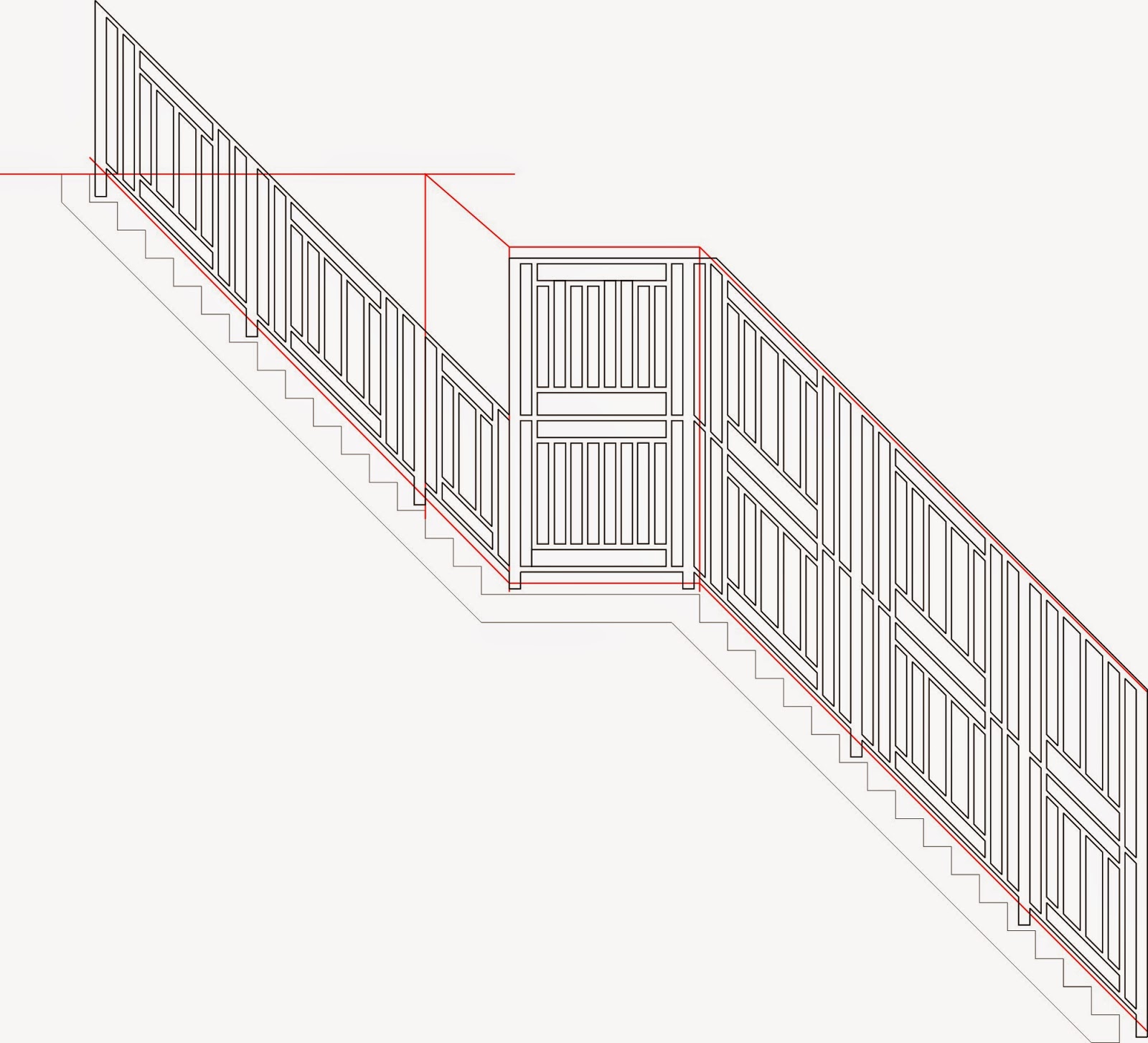 3) The station house still needs to be finished for the Southport station. The "work in progress" building front sits in place under the tracks. I also built a sign and support structure for the small building slice that sits next to the station. I need to paint that, create the sign and then install. 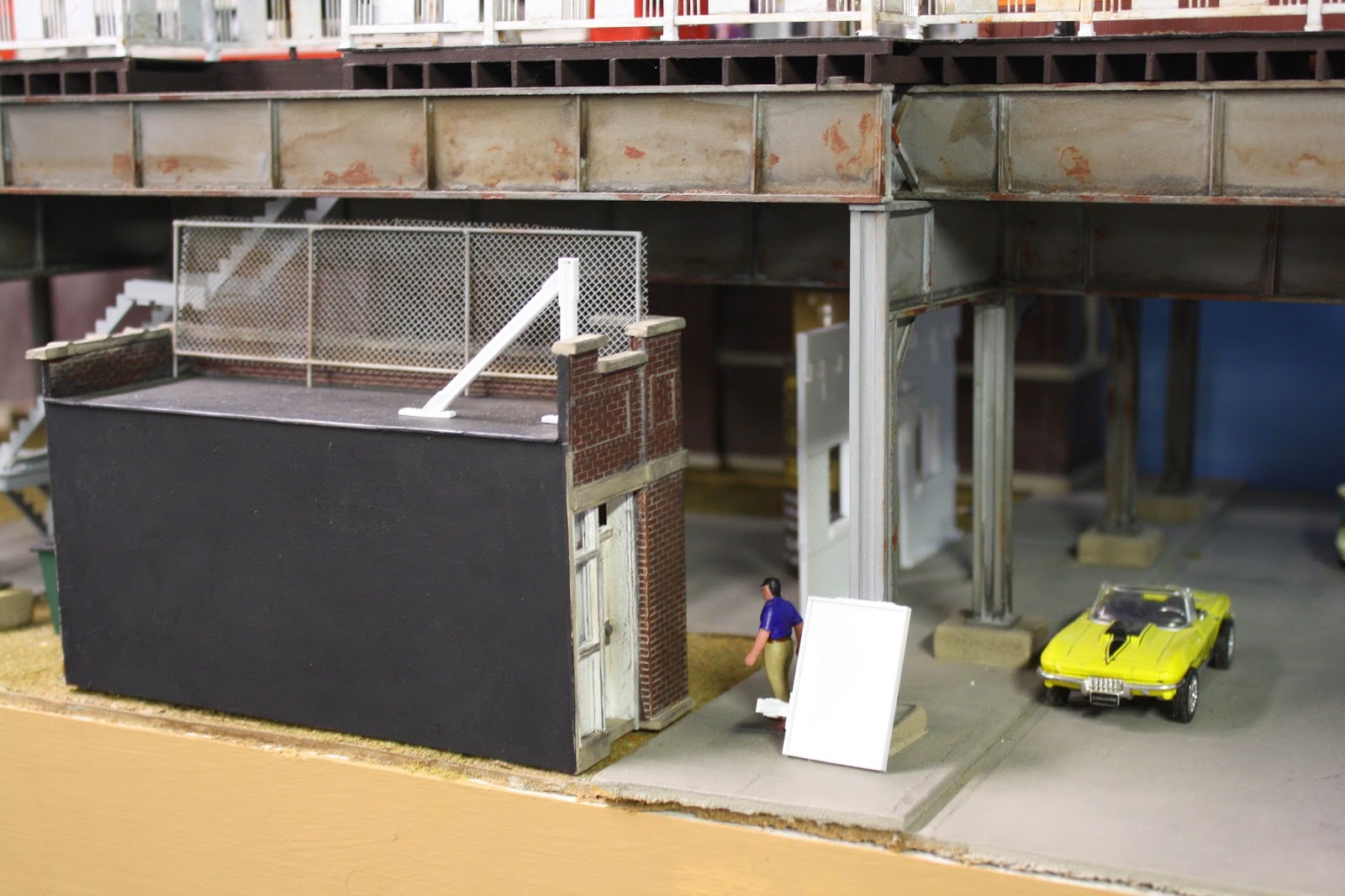 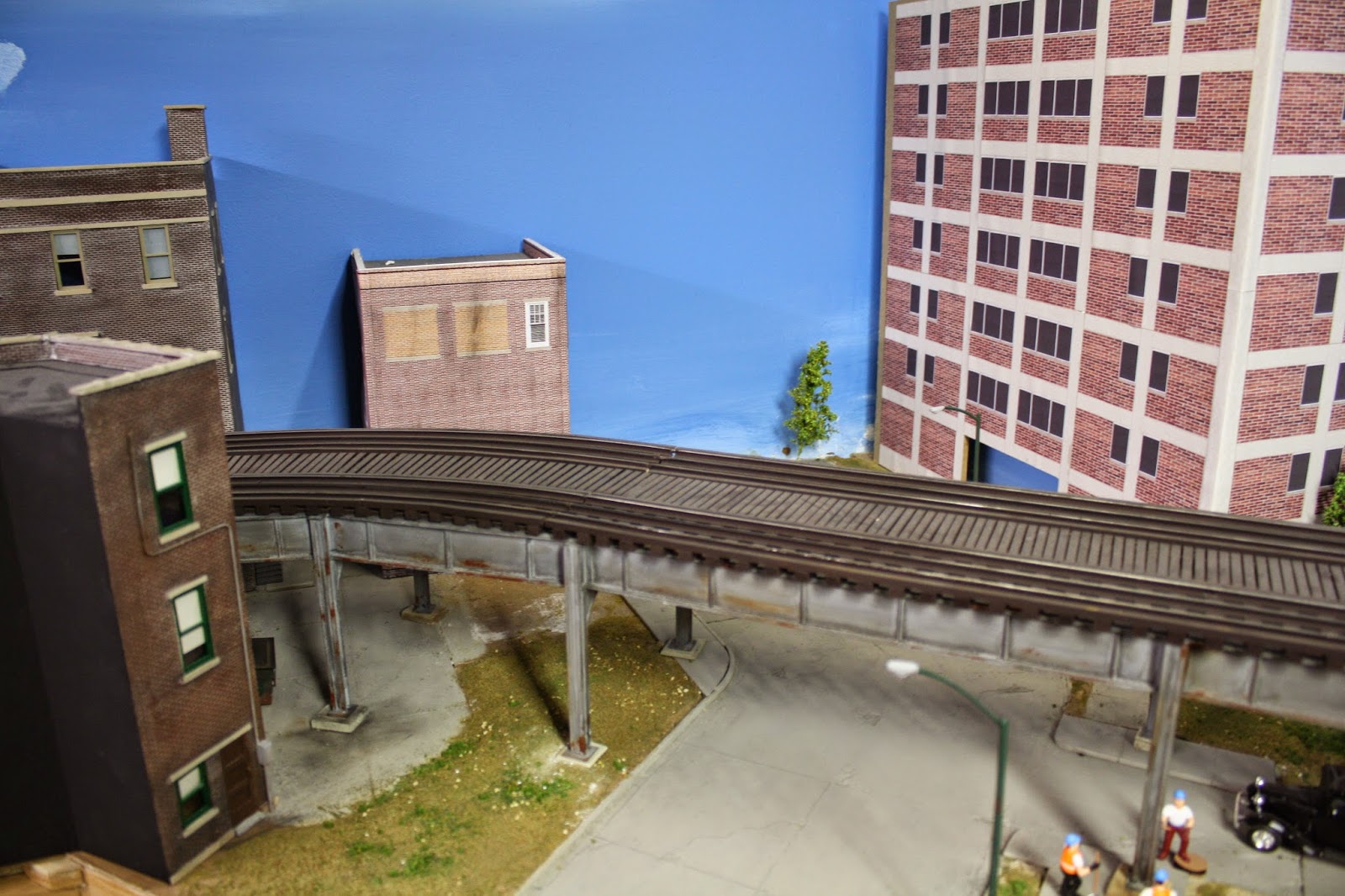 5) I have an on-going issue with material storage and organization. Below is the completed project of sorting and cataloging my supply of strip styrene. I consolidated multiple duplicate bags into one bag per size. Now I just need to figure out a good storage method. 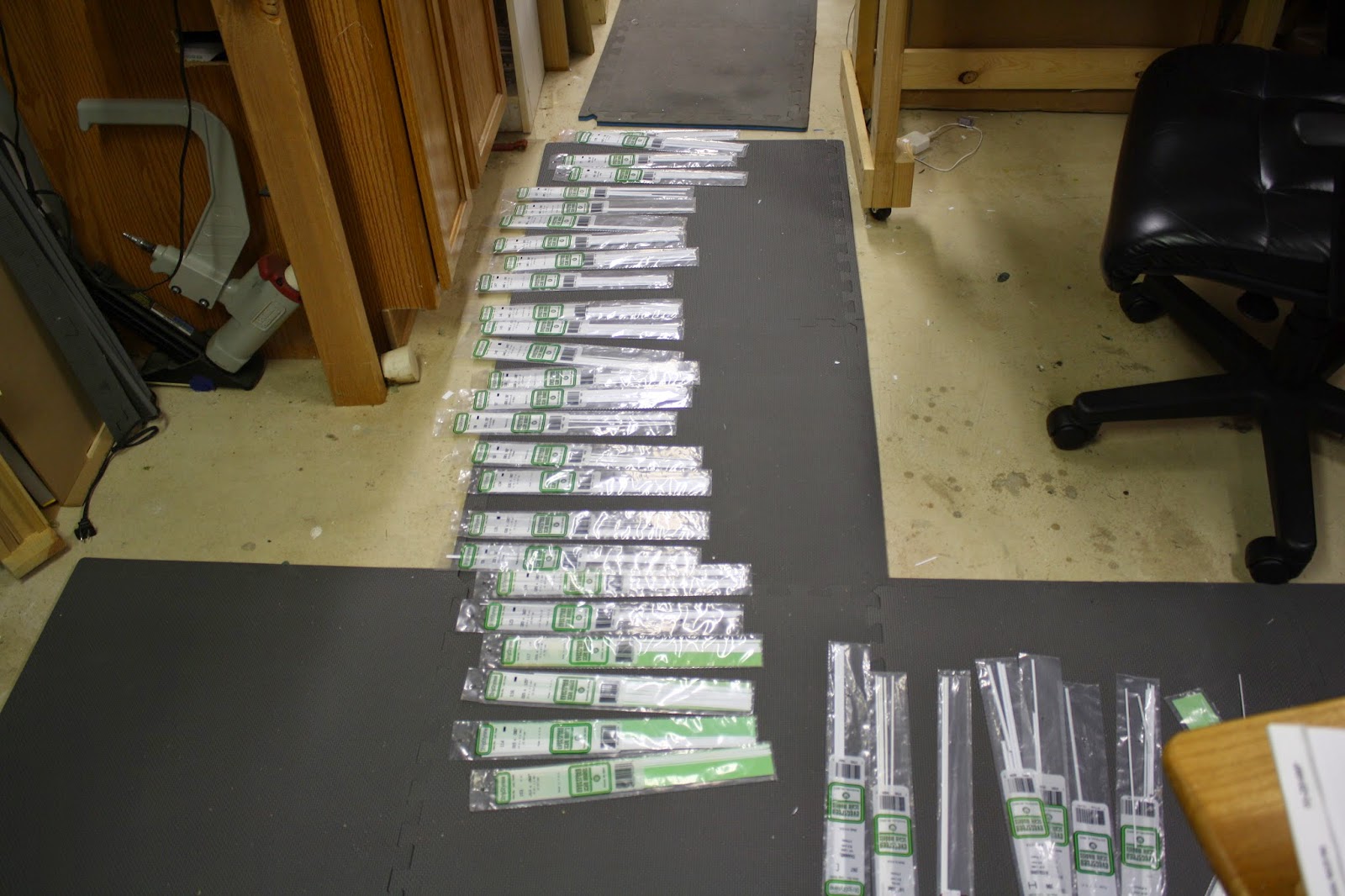 6) In the following picture, the two buildings on the left need to be completed with details and back porches. These will be the rears of two two-flat apartment buildings. They are both scratch built from styrene and N-Scale Architect brick sheets. The larger building to the left is paper and MDF. That will have to be replaced by a styrene building that has more depth. 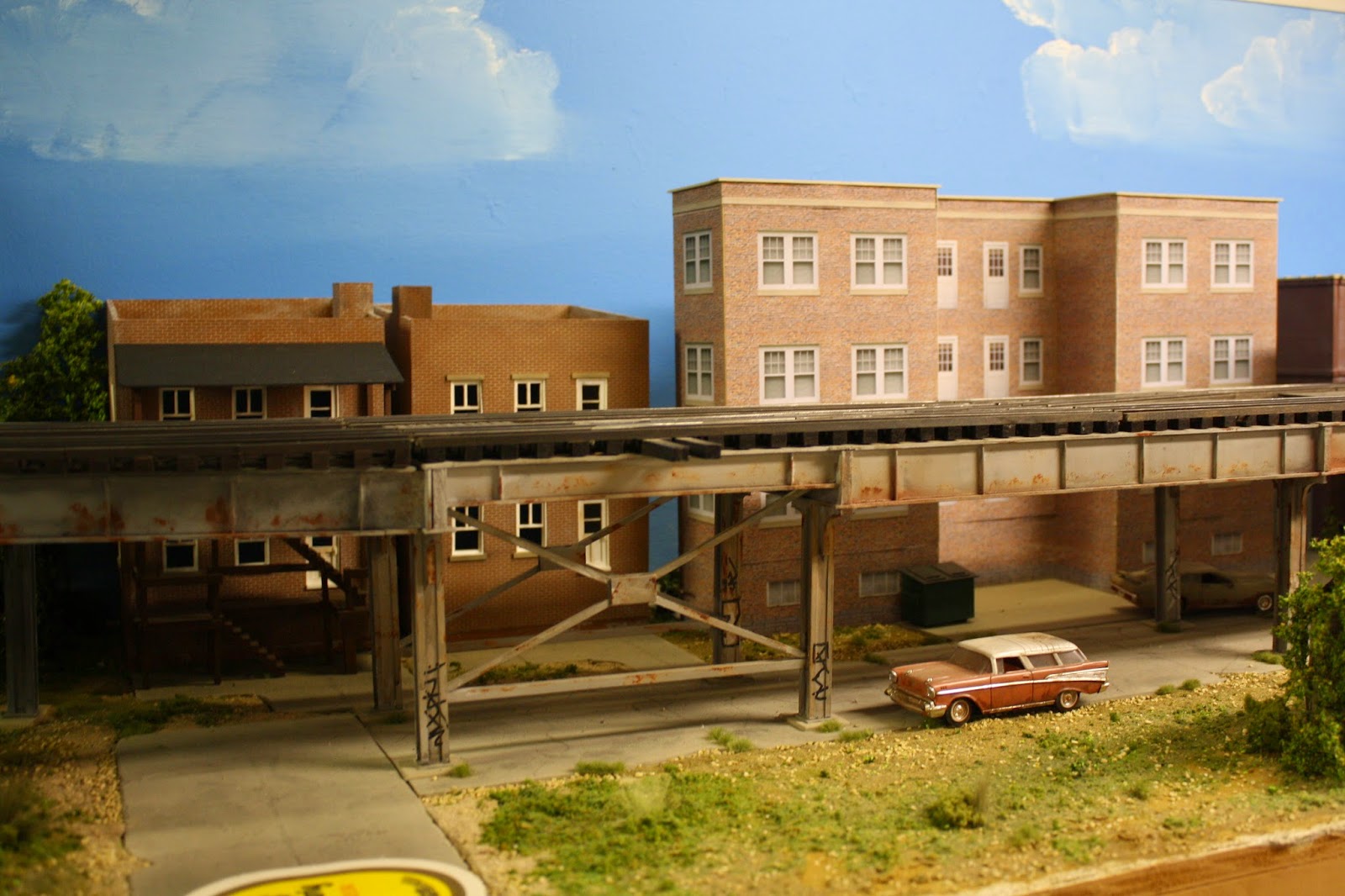 7) I need to finish and paint the Island Model Works 2200's. I'll also have to perform some surgery to the donor 3200 chassis as the IMW bodies sit too high. 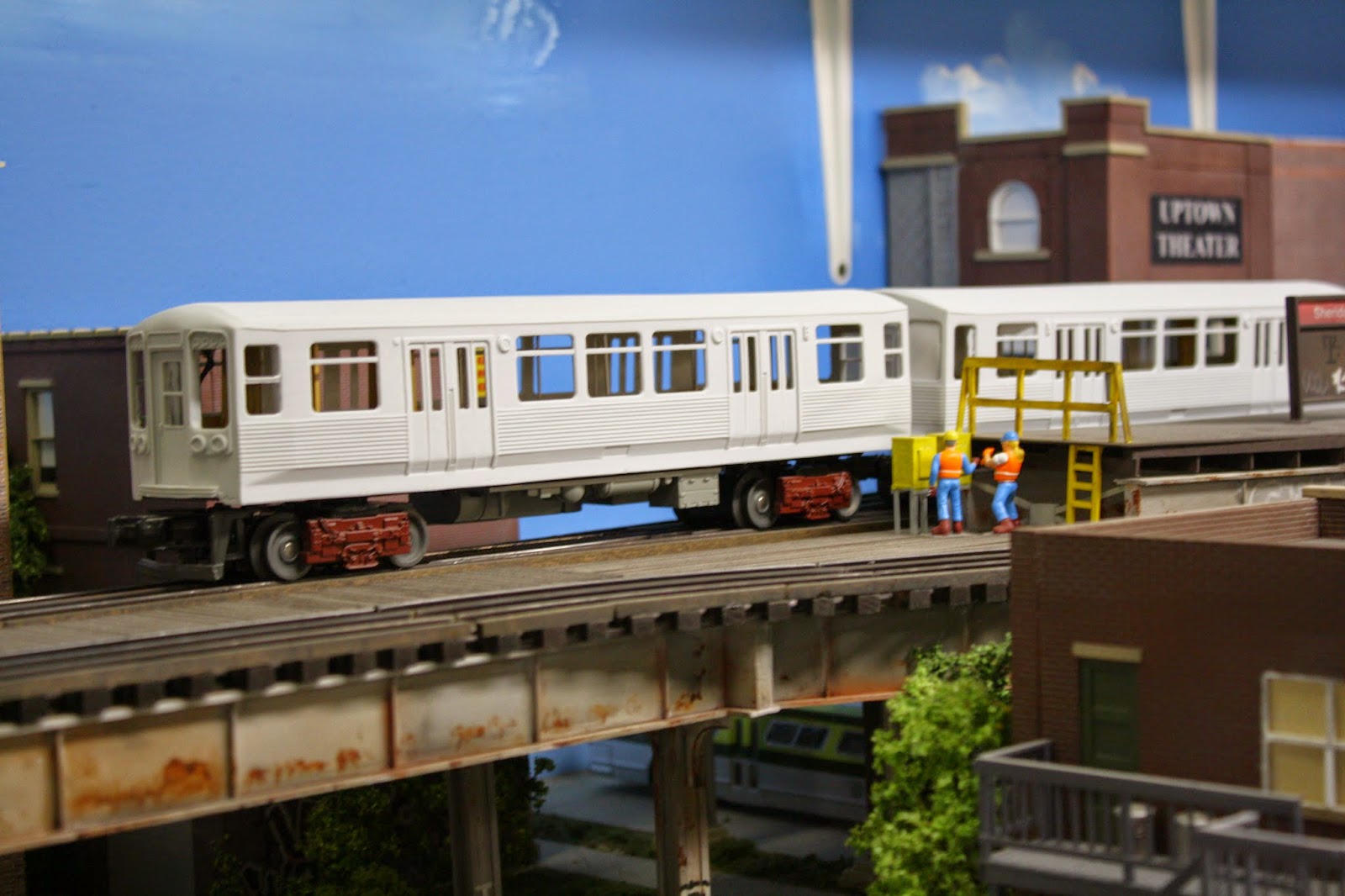 8) At the Sheridan Road station, I need to add lights, finish the ground level details and replace the canopy. I'll probably also rebuild the stairs and most likely replace the station platform. Currently the platform is made from Evergreen Styrene scribed sheet, buit I want to replace with individual wood planks. Also, the paper building behind the station needs to be replaced. 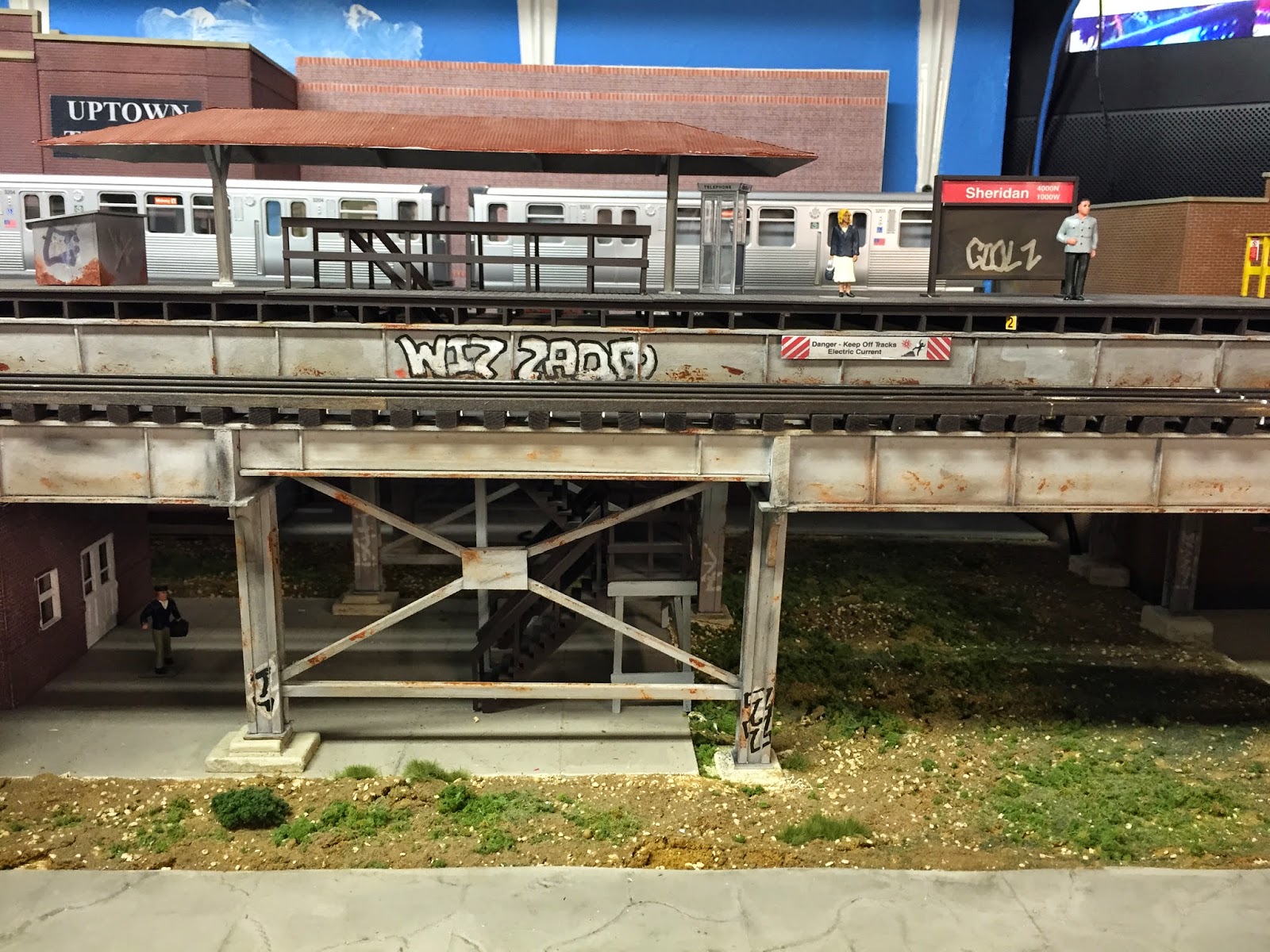 9) The new commercial building needs to be finished, the scenery added to the corner module and the background buildings need to be finished. 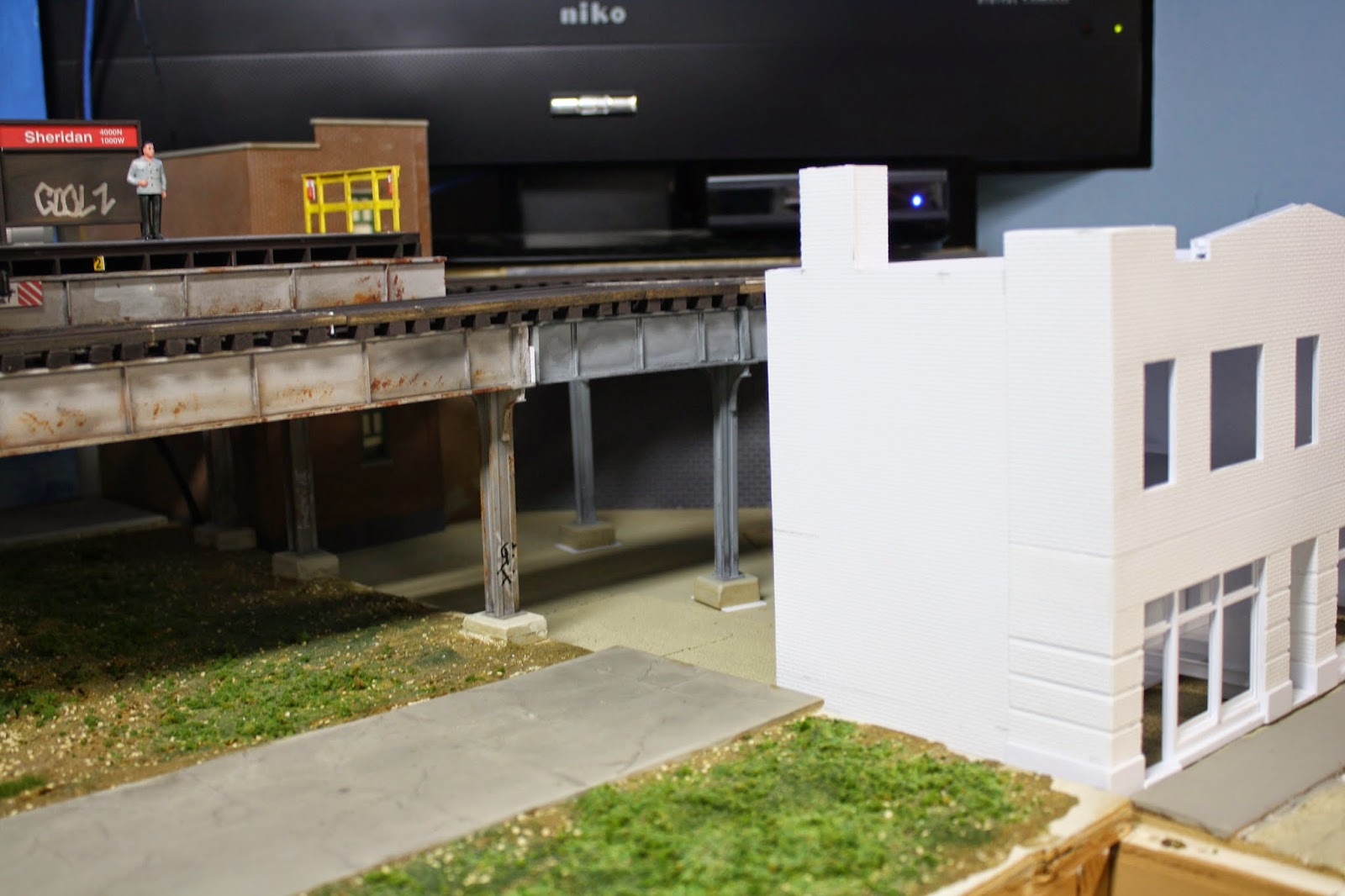 10) The apartment building needs to be finished and the street scene finished. Also, brick background flats will be added to the back drop here. 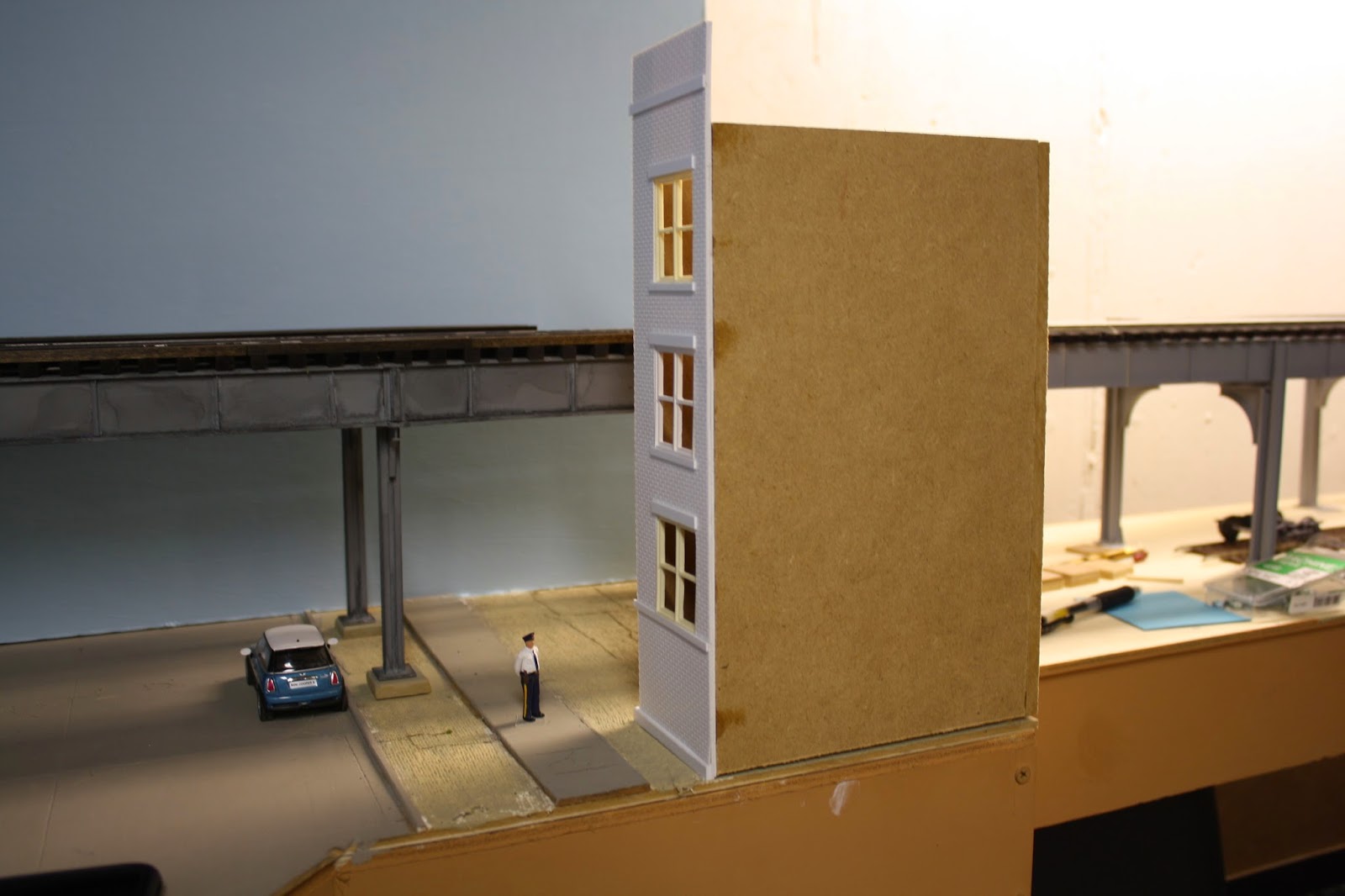 11) The new elevated extension and station needs to be completed. Stored below the track are my experiments in 2 rail track ... conversion of the layout to two rail is still in the distant future! 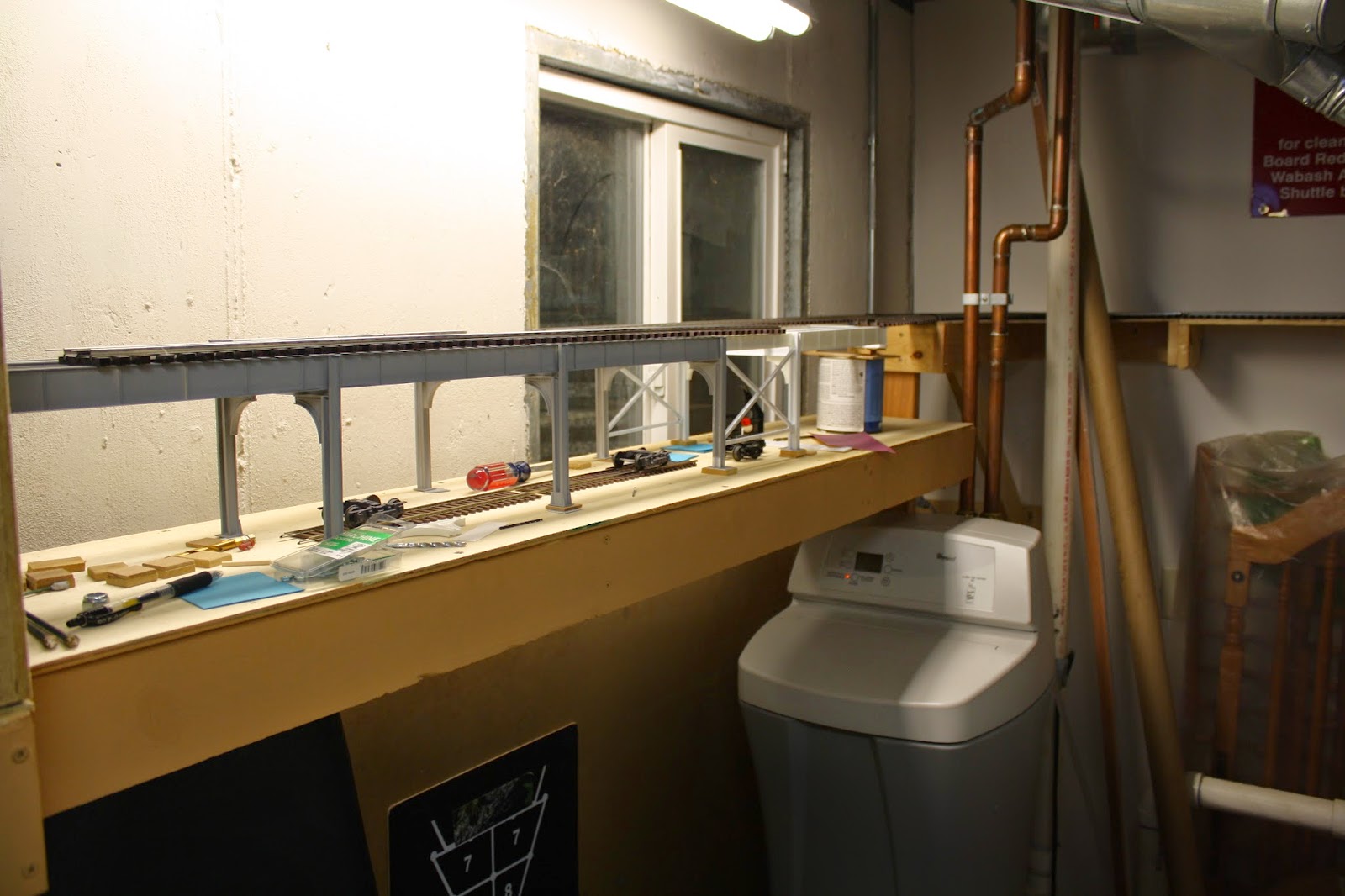 12) The expansion. This area will be the Logan Square terminal (pre-subway). This will be a massive undertaking as all the structure and buildings will have to be scratch built. So, for now, the benchwork acts as a storage shelf. Also shown on this is an apartment building flat that originally was going to be located at the Sheridan curve. However, it blocked the view of the TV so I'm not sure what I will do with it now. Also, hidden to the right is the first Baldie 3D printed prototype model. I haven't decided what to do with that yet. 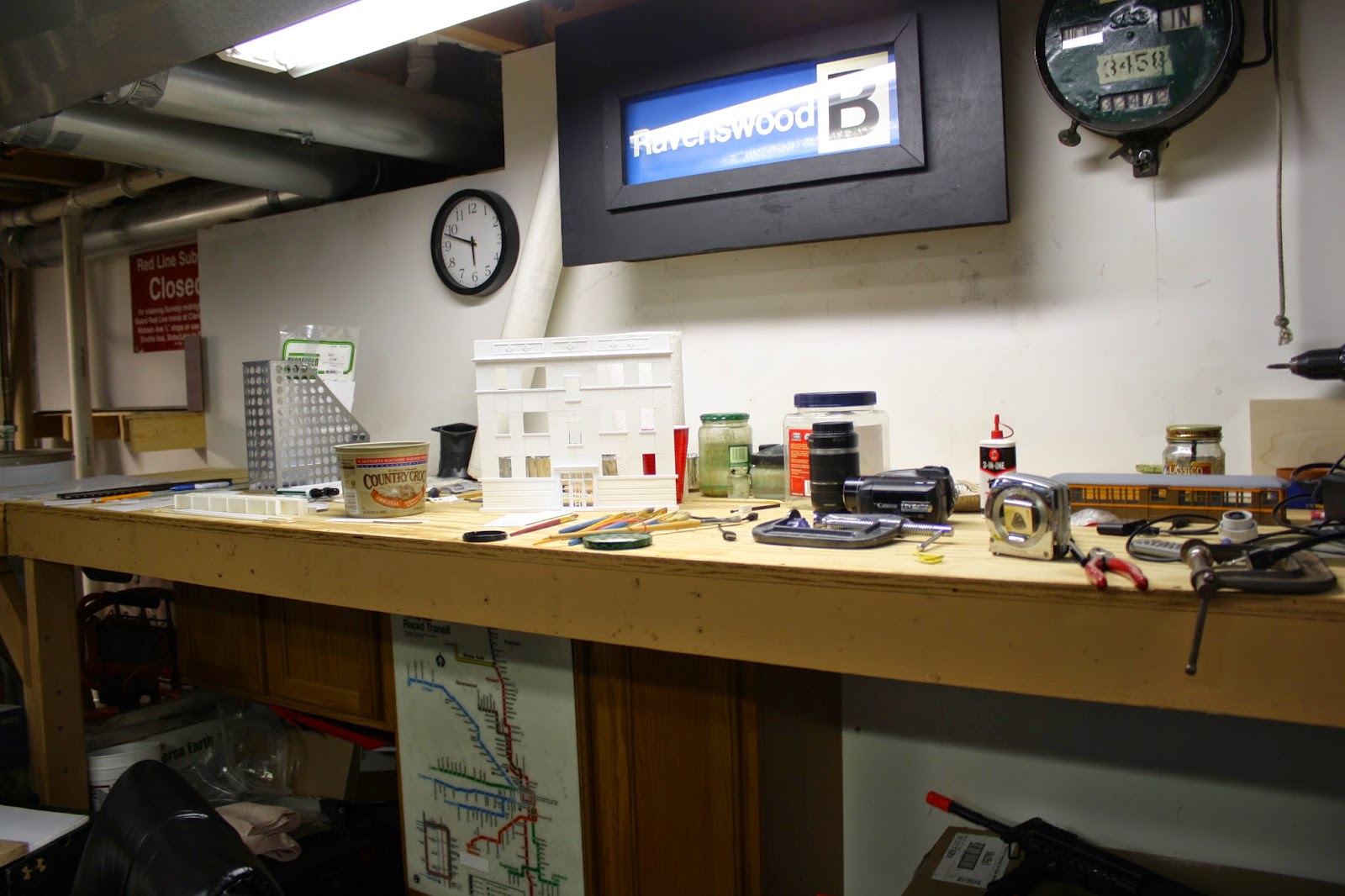 13) The ongoing mess of the workbench. I still need to organize this! 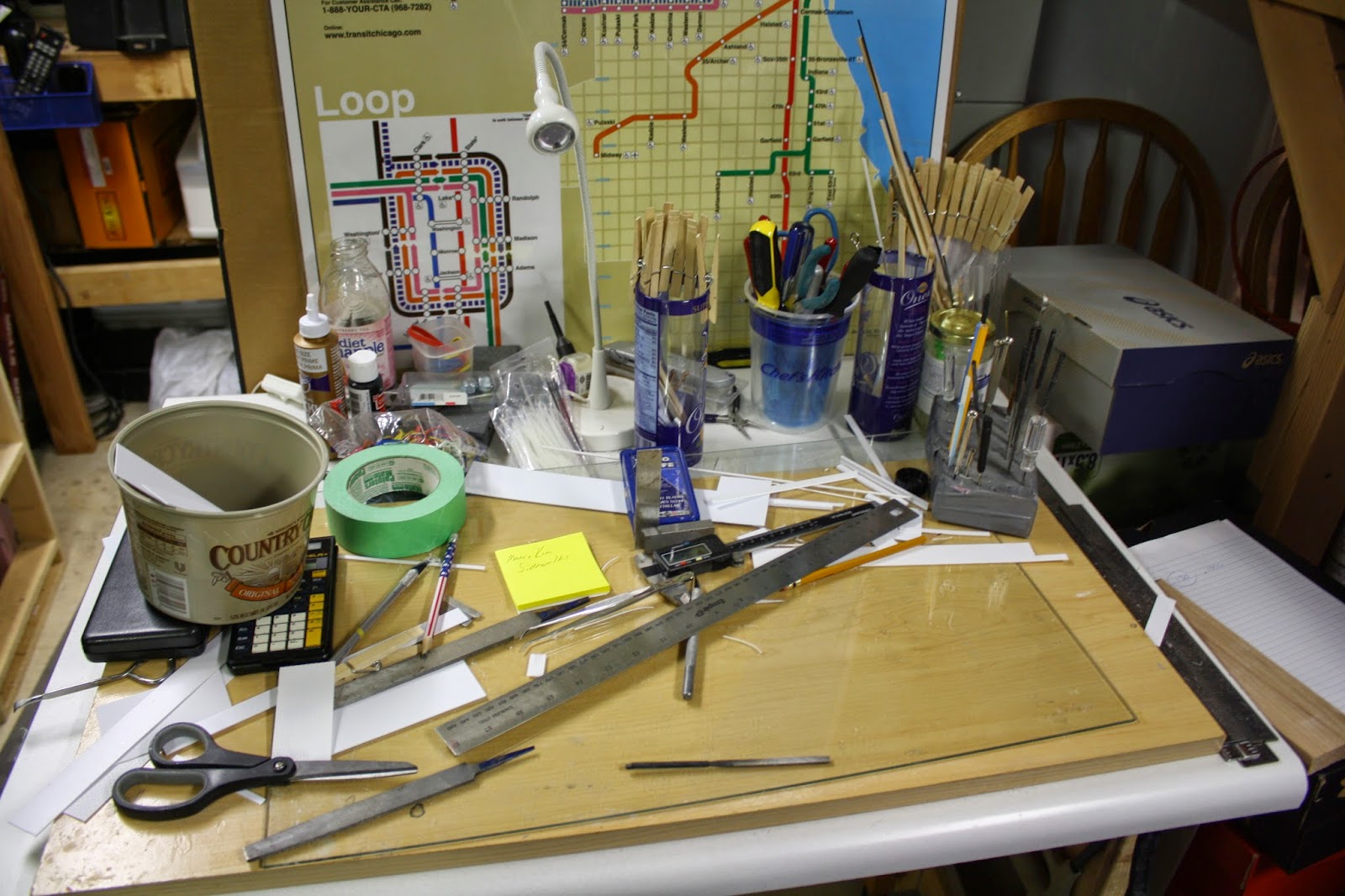 Next up will be a review of the 3D printing projects.
Posted by CTA Fan at 1:17 PM