The new Sheridan / fuse panel curve has been added: 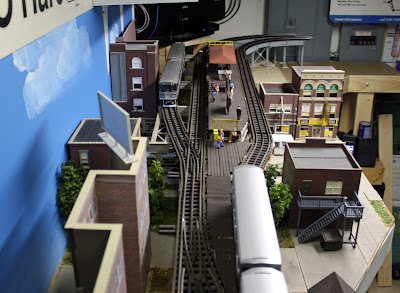 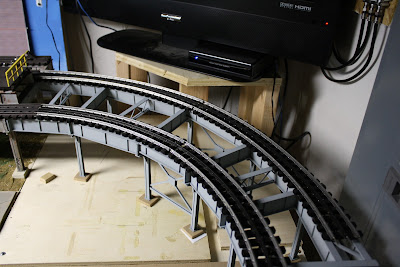 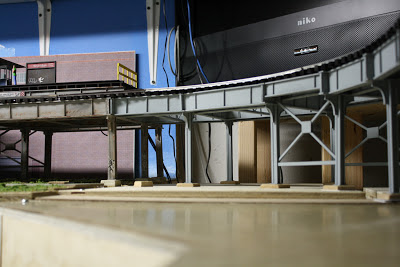 But, there is a problem. When I originally built the Sheridan Road station, I didn't give a lot of thought to the eventual expansion beyond the station. So, I built the platform right up to the end of the structure. Now, there is some interference with the swing of the trains as they round the curve, as shown below: 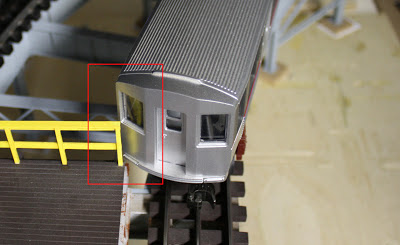 I haven't tested the other track, but I'm sure it'll have the same issue. I tried to "push" the curve as far out as I could, but the above picture shows the least amount of interference that I was able to achieve.

So, I will probably have to shorten the Sheridan Road platform, as shown below: 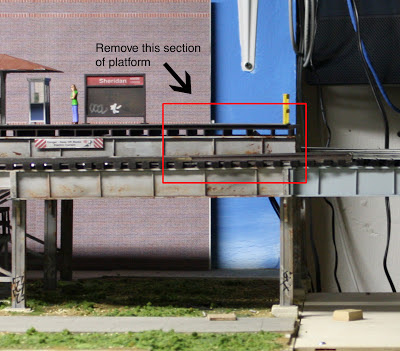 The reason why I will shorten this much is that I do have cross beam at the left side of the red box. That way, the end of the station platform girders rest on a cross girder rather than float in mid-air. A poorly photo-shopped after view would look like: 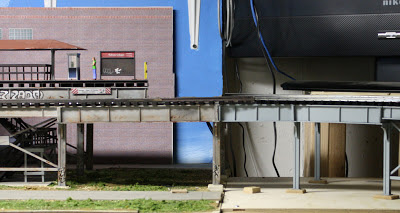 I'm not sure how I like the looks of this, but its probably the best solution I can come up with. I can't move the curve any more since the fuse panel is in the way. Shortening the platform by this  much is overkill, but I really don't have too many other options.

I have also uploaded a new video to Youtube, showing the new Southport Station and some of the finished residential area;


In addition, I recently appeared on the October 1, 2012 edition of the Model Railway Show podcast to talk about the layout. It was a lot of fun being interviewed for the show. The link to the podcast's web page is:

And the episode that I appear on is the October 1 show: October show notes

Have a listen if you find the time. Trevor and Jim do a really good job on creating a high quality podcast.
Posted by CTA Fan at 12:00 PM