In my last post, I mentioned how I had clearance issues with my Sheridan Road station platform and the installation of the fuse box curve. I was contemplating the removal of about 4 inches of the platform so the trains wouldn't hit the platform as they entered the curve..

Shortly after writing the post, renowned traction modeler Ed Halstead (you must visit his blog Modeling Insull's Empire in O Scale ) sent me an email. He suggested that I taper the platform to allow clearance for the trains. I told him I had thought about doing that, but thought that shortening the platform would be the best course of action.

Well, knowing Ed's level of knowledge and skills, I decided to take another look at his suggestion. And, much to my delight, tapering each side ever so slightly has allowed me the clearance I need to clear the trains on both sides of the platform! 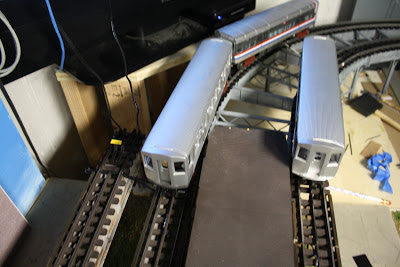 Five minutes of work in removing the end railings and then cutting a small taper on each side worked like a charm! I still need to touch up the paint and build a new end railing, but that work is nominal compared to shortening the platform. Plus, I retain the original length of the platform. 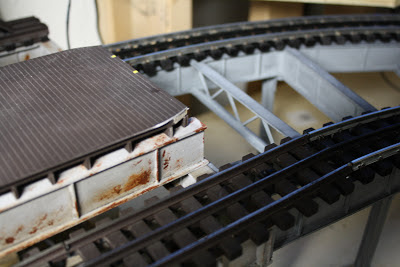 Only the platform needed to be tapered. Since it was the car body that was hitting the platform, i was able to leave the girder alone. 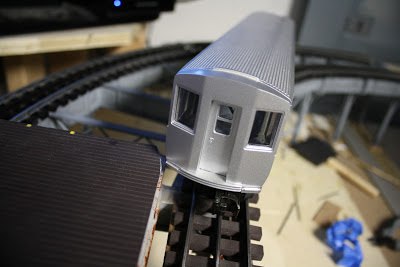 Its a tight squeeze, but the car body clears the platform edge. Close enough, which works in horseshoes, hand grenades and nuclear war ... and now elevated modeling. 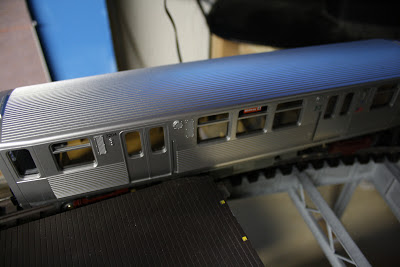 Running a test train on the other track. No problems here either. 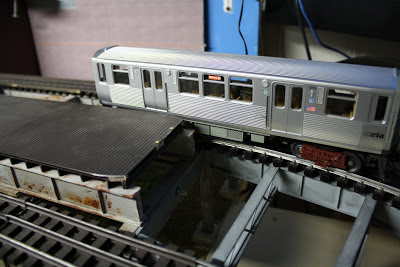 So, in the end, crisis averted. Thanks to Ed for providing the solution. His assistance is greatly appreciated.

Also this weekend I had some extra time so I made a video of some four car 3200 series trains. Unfortunately I can't really run four car trains since my station platforms are too short (the trains is about four feet long), but it looks nice.