Fall means football, but some projects can still get done in a little spare time.

I started building some background buildings for the curve into the Cabrini Green area. I made the back of a basic frame house and a generic brick building/factory for the area behind the tracks. 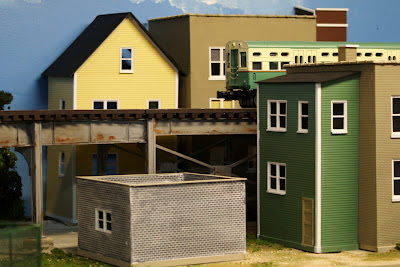 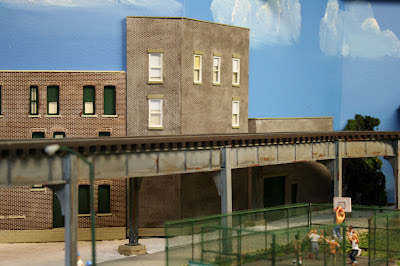 In front of the tracks I made an enclosed back porch for one of the two flats and a brick garage. I still need to weather, add window glazing and final paint touch ups, but the majority of the work is now done.

I also started construction on a commercial building that will go next to my other station. This will be a "half" building that will be up against the backdrop. The front facade is mostly done, I still need to make the side and the rear. 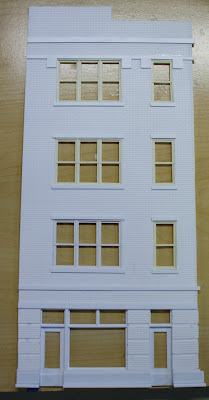 Speaking of the other station, I finally got around to contacting Jimmy Simmons at Monster Modelworks about having the railings for my station laser cut. I also inquired about having the canopy supports cut also. Jimmy was kind enough to walk me through the process, and after I made some drawings in Corel Draw, he sent me the below samples. 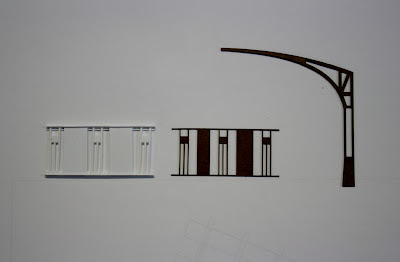 The laser cut pieces are on the right (in dark brown). My homemade railing section is on the left. I tested a couple of different spacing options on the laser cut railing section, that's why the spacing is a little off (that's what my story is ... not that I goofed the drawing). The parts are cut out of .025 laser board and the vertical supports on the railing are 0.025 thick.

I adjusted the Corel Draw drawing to correct the spacing and am having Jimmy cut the canopy supports out of 1/8" thick material instead of the 0.025" laser board (a wood-like material). I will be adding 0.080" Evergreen angles to the top and bottom of the railing sections. Having the railings laser cut will save a lot of time and make for a very consistent railing.

I've also started the new curved section next to the Sheridan Road station. I will call this the Sheridan curve or more appropriately the fuse box curve. 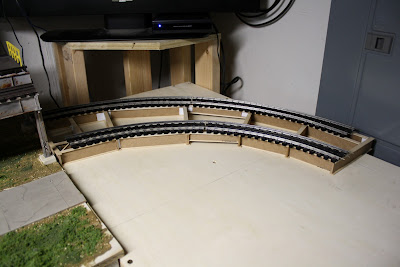 One big advantage for 3 rail is that I can turn a 90 degree corner in barely 21 inches. I did test that a train will clear the fuse box on the right, if by about an inch. 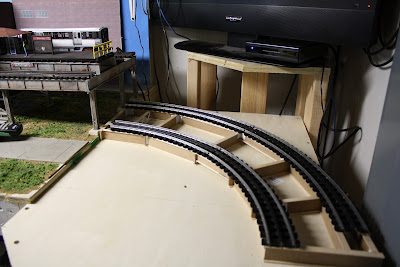 I built a new stand for the TV behind this section, so there's no interference there either. I thought about shortening the Sheridan Road station by about 5 inches to move the curve over, but since it does fix, I am going to leave it as is. This section will be completely independent of the rest of the structure to make accessing the fuse box easy, if needed. For photos or operations, I might attach a brick facade to the fuse box using magnets ... to act as a photo backdrop.

This shows how I build a curve ... I lay out the girders first to follow the layout of the track. This was a tough curve to build as the the track spacing goes from 4 inches to 7.5 inches to clear the platform station. So, I had to use more short sections of girder than I think i would have if the track spacing was consistent through the curve.