Updates for August, 2015 - or summertime slacking

I haven't posted in quite some time as there just hasn't been a whole lot of progress made on either the layout or any projects.

First up ... just storing the projects on the track ... does make for tough times for those trains in revenue service.

I've started (finally) to think about painting the Northwestern motor car (Q-Car body) that I was able to obtain earlier this year. Thinking means I've gotten the interior painted ... 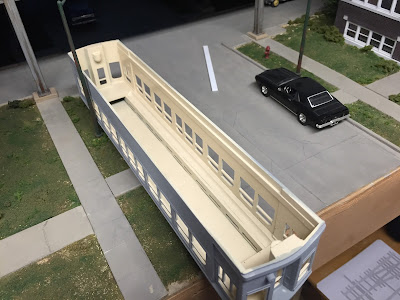 One difficulty I was presented with this car was matching the paint that was used on the trailer I have (purchased pre-painted). Luckily, after some trial and error, I was able to come up up some pretty close matches. 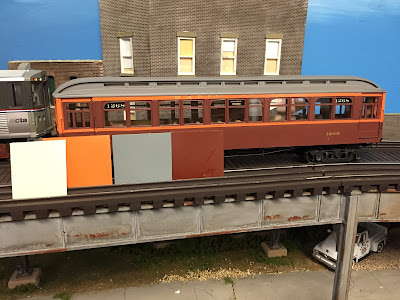 The colors used are (from left to right)


The "Ivory Silk" is more tan in real like, but not so creamy as a passenger car interior cream. I think its a good compromise.

Note the difference in brown/orange paint scheme from my first Baldie 4000 model: 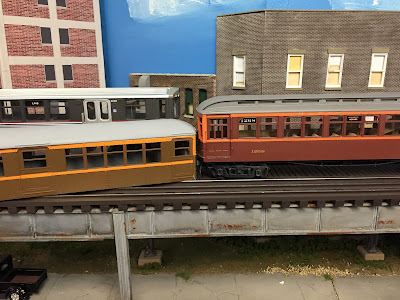 I guess its just a matter of personal choice (or circumstances in my case) as to what colors you decide to use. The Baldie is painted in the following colors:

Roof? I can't recall, might even just be primer.

As for black paint, I really like Tru-Color TCP-009 Grimy Black.Its sprays great straight from the bottle and is a nice grey-ish black, good for trucks and such.

For black touch-ups or brush painting, try Vallejo 70.862 Black Grey. It brushes fantastically and is a near 100% match to the Tru-Color Grimy Black

I other projects, I have finally installed the under body details on the 4000 series Baldie model and attached the grab irons.

Under body details from Q-Car ... except NO MU connectors. My set from Q-Car didn't include those. I guess I'll scratch build those. 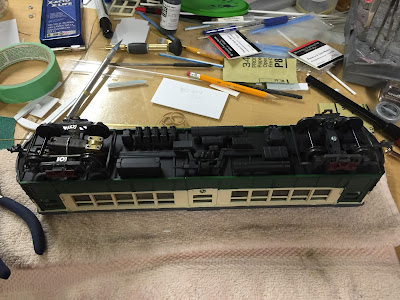 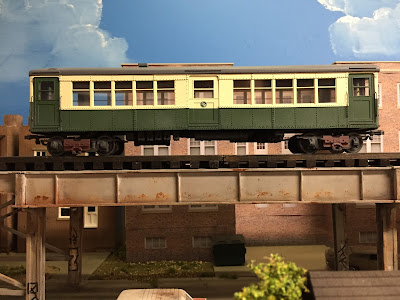 I still need to add the stirrup steps under the doors, some piping under the couplers, destination signs and the car numbers in the windows. Oh, and the remote control components.

As for progress on the layout, I've begun mocking up some background buildings at the Sheridan Curve. 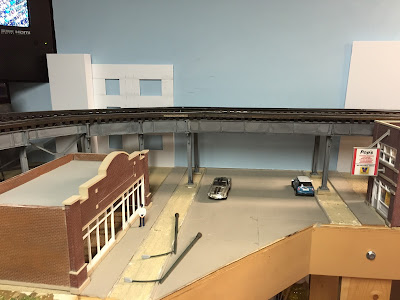 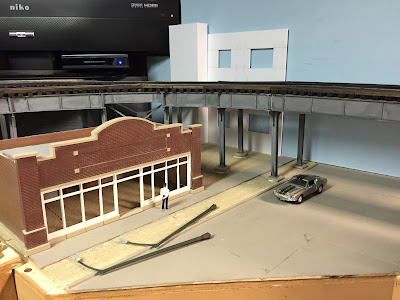 These will be brick background flats Eventually I will skin with brick sheeting and add windows. The new commercial buildings still haven't found a permanent home but it looking more likely that the single story building will remain at the Sheridan Road curve.

And lastly, I've been assembling another CRT 4000 series Baldie model for a fellow transit modeler. The roof has just been glued on and I have been working on interior details. This Baldie will feature a more detailed interior with bowling alley seating as per the original (3D printed) and detailed bulkheads (scratch built from styrene. 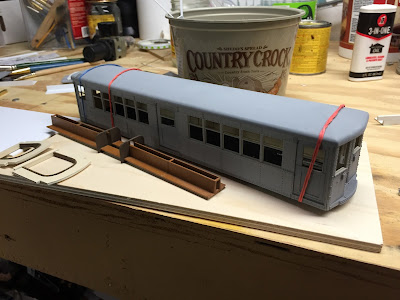 Other than this, its been a slow modeling summer. Its been too nice outside to work in the basement!
Posted by CTA Fan at 4:52 PM