Due to continuing to work on home improvement projects, along with an emergency hot water heater replacement, not a lot of progress has been made on the layout lately.

Work on the 3D printed Cincinnati Car Co. 4000 series "Baldie" continues, with some light weathering being added and window glazing finally being installed (this car has to be the slowest build ever).

I still need to add the under body details and grab irons to the model. But, its coming slowly along.

In other projects, I'm still working on the two new retail buildings for the layout. One is a two story commercial building with two storefronts and the other is a single story building with one large store. The construction of both buildings is documented in prior blog posts.

Now, however, I have a bit of a decision to make. The two story building was originally designed to be placed next to the Sheridan Road station. However, the single story building also fits nicely there.

What I like about the single story building is that it doesn't block the view of the station as much. But, the two story building blocks more of the curve. I'll have to think about this.

And one more photo as a two car Ravenswood train makes its way through the North Side. 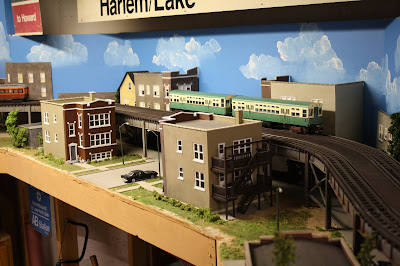