Apologies for the extreme time between posts. Its been a busy time ... both with modeling and other things.

I received my 4000 series trucks from Q-Car. And of course, these are a work of art. Beautiful doesn't begin to describe how nicely detailed the trucks are...the craftsmanship is outstanding.

So, currently the shop has replaced the North Shore spare trucks that were under my first Baldie model with the fresh out of the box Q-Car correct trucks... 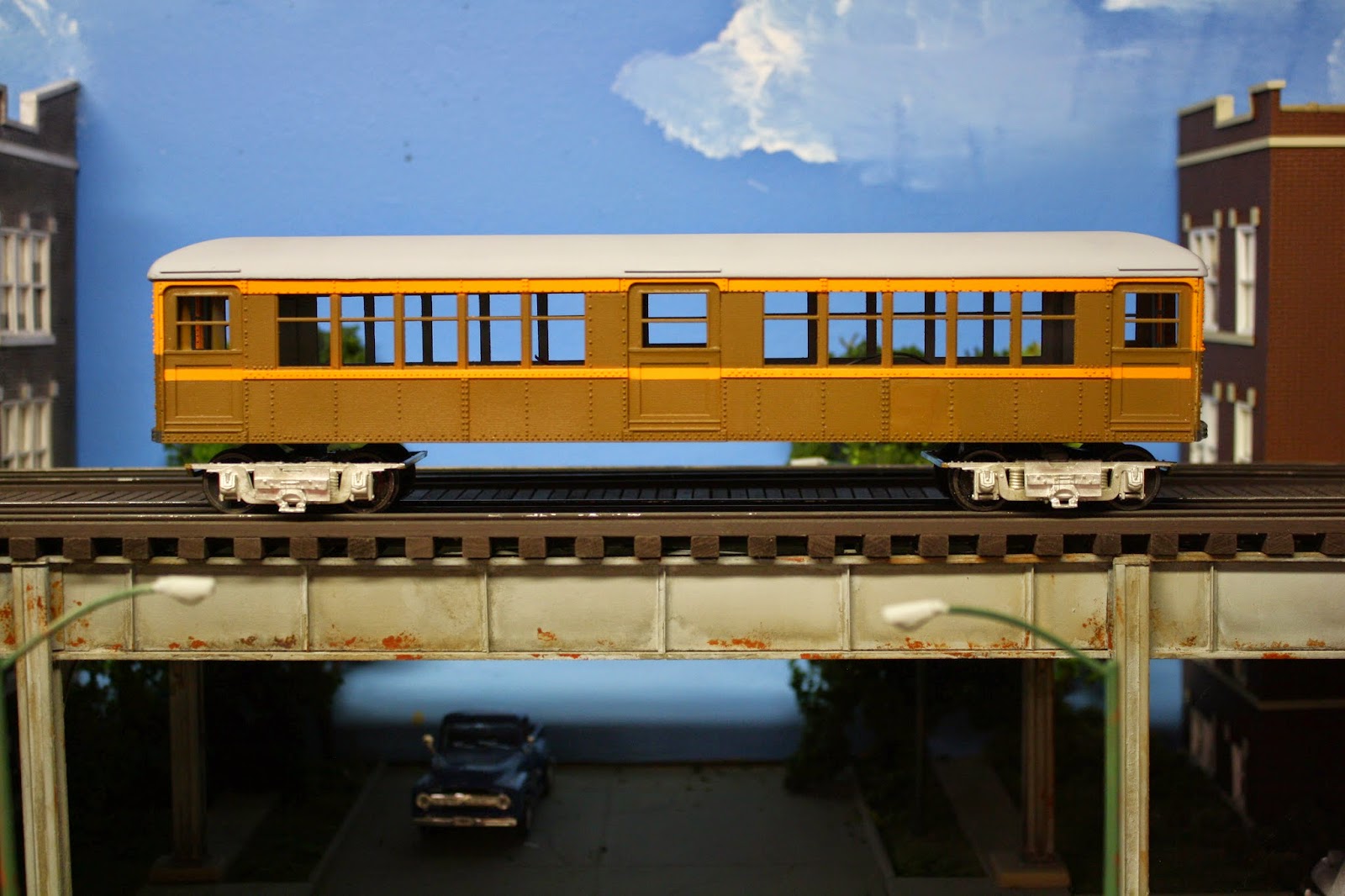 The shop still hasn't added the under body details, which I also obtained from Q-Car. That might wait awhile as I'll probably make one powered floor and then just swap bodies. The transit agency is short of funding at this time so another set of power trucks has to wait.

As mentioned in a prior post, the design of the Baldie model was changed to better account for the proper roof contour and some minor fixes that needed to be made. Once completed, the files were uploaded to Shapeways and via the magic of 3D printing, the pieces were received back in about 2 weeks time.

Below is the pile of Baldie parts received ... 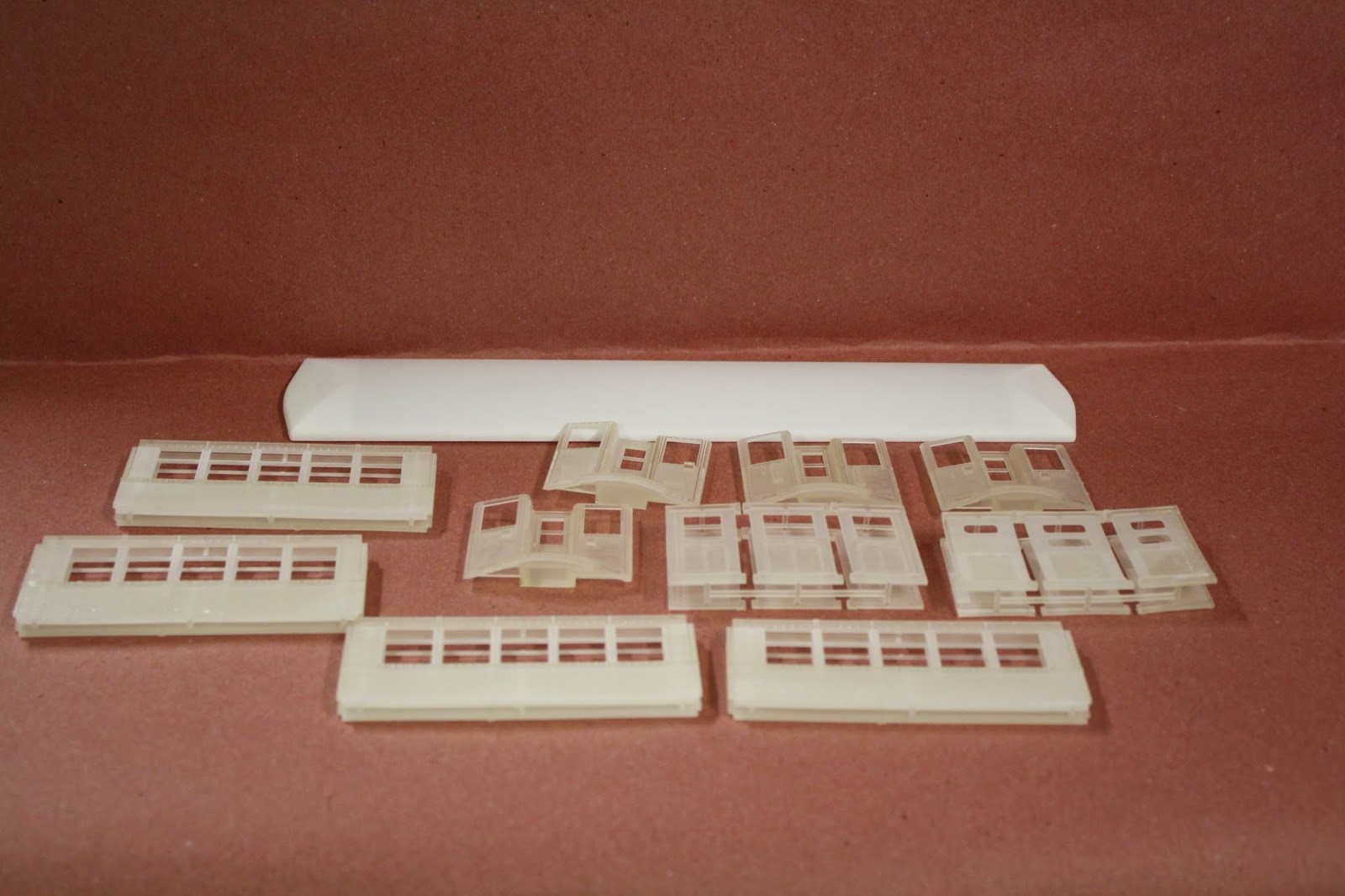 Since O scale is too big to print in one shell, the car is made up of 13 separate pieces (roof, two ends, four window sections, and six separate doors). In this picture I have enough parts to make an original style door car and a modernized door style car. But. I only ordered one roof ... need to order another.

After cleaning and assembly. the car in primer:

Note ... these pictures are of an extreme close up ... zoomed all the way I could go to show the actual surface detail. At normal viewing distance, the surface does look better. 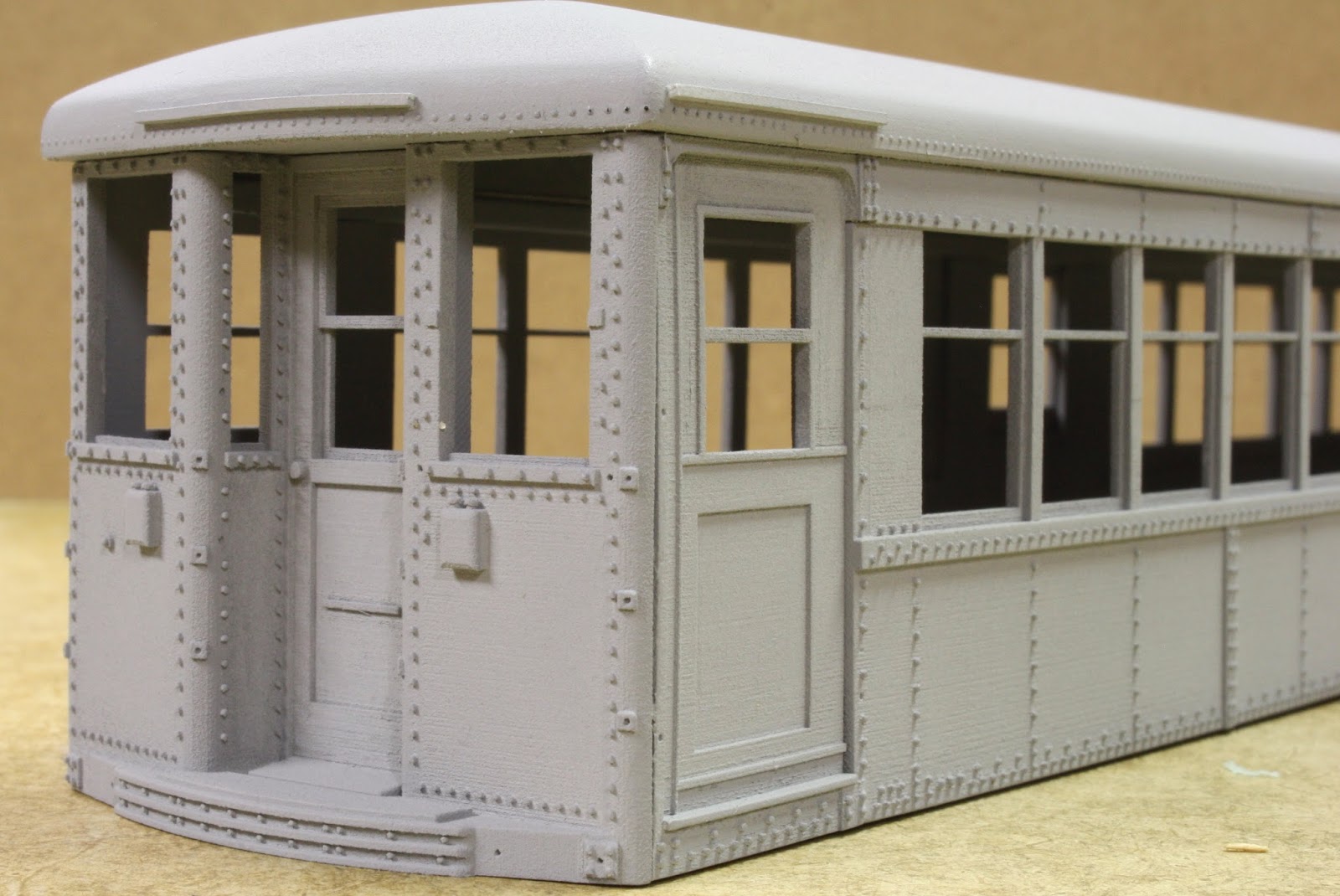 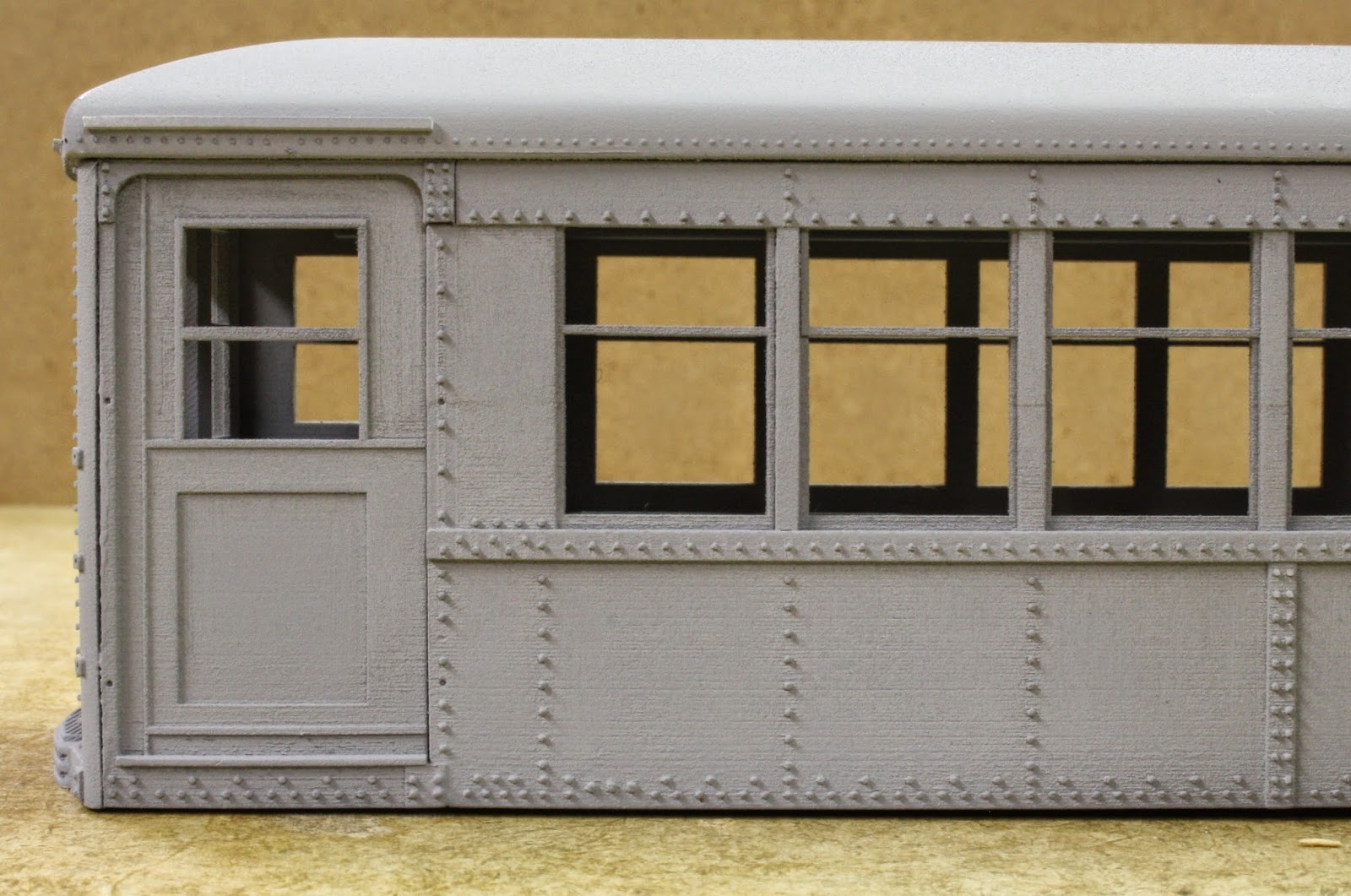 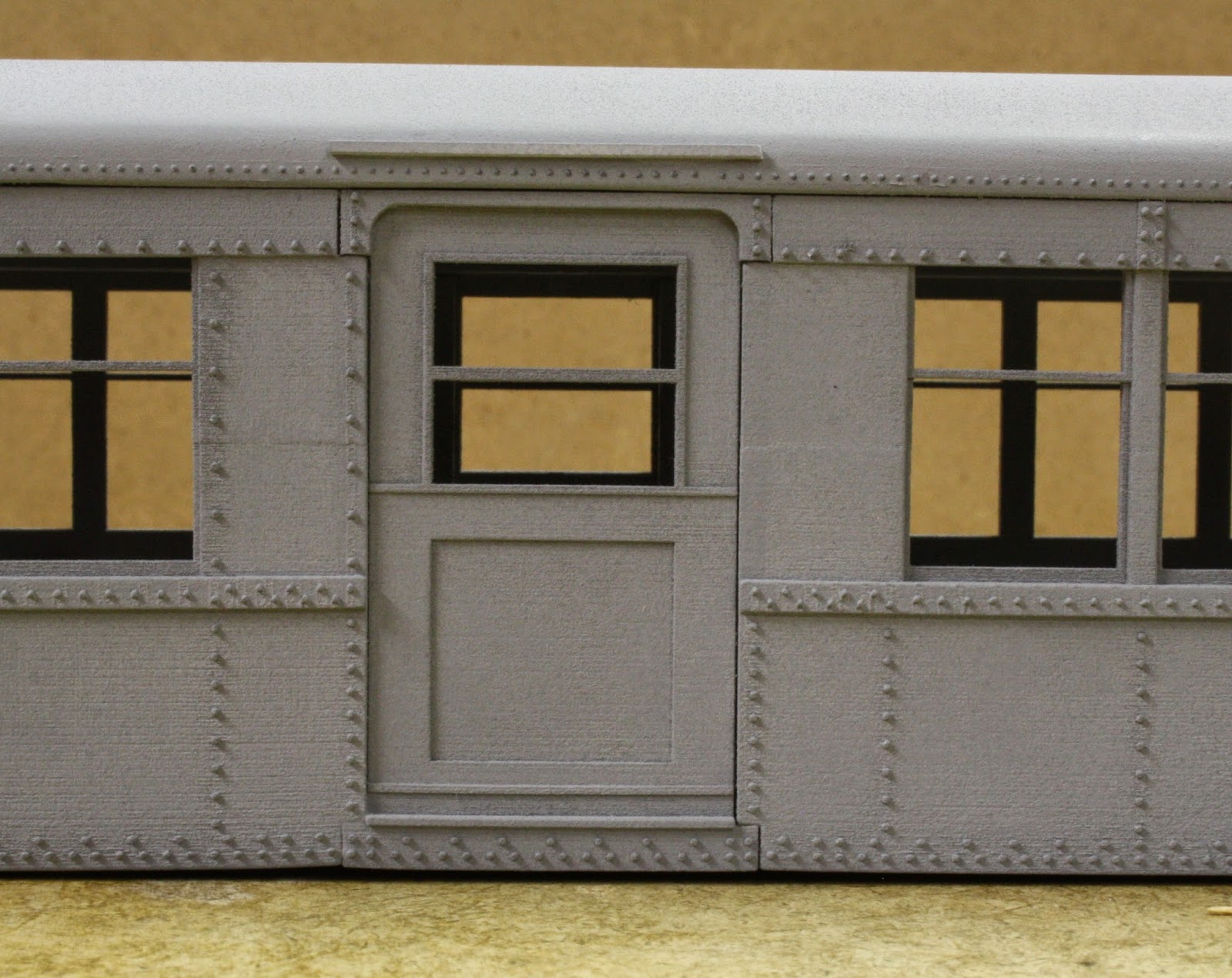 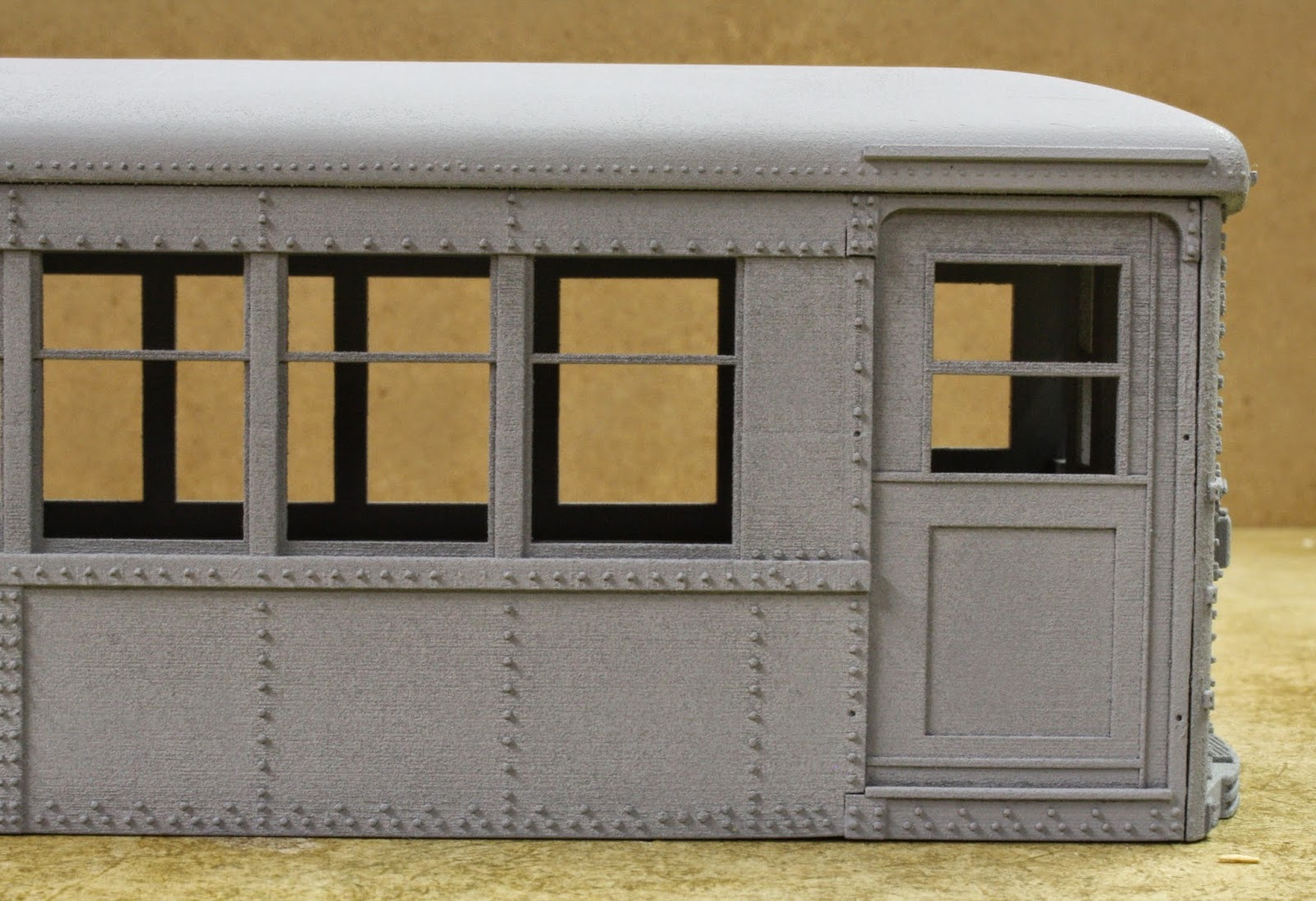 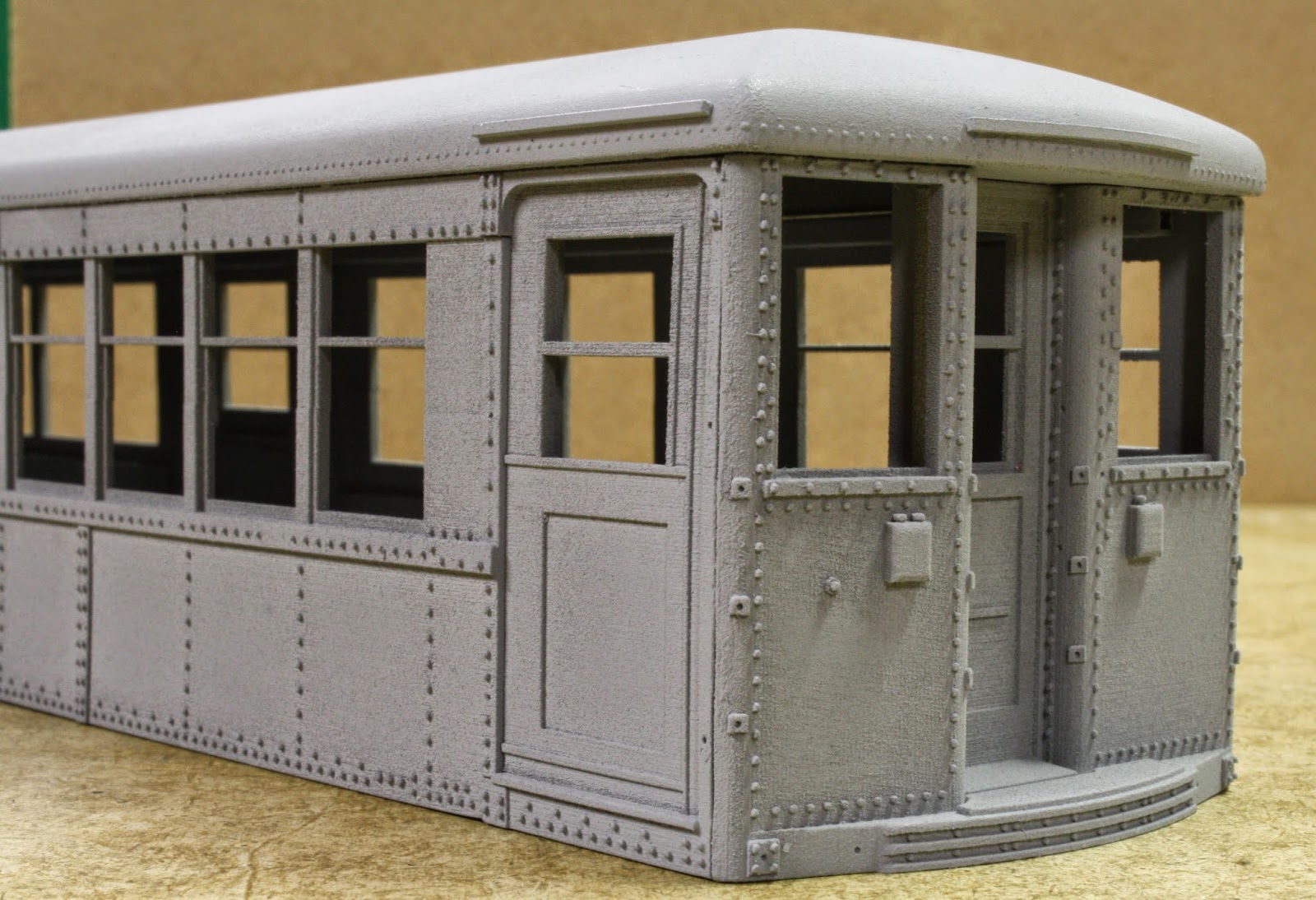 Also, on this model, I added Archer Transfer Rivet Decals to the roof line to simulate the roof rivets that are a defining feature on a Baldie. These, however, I believe are "too scale" to show up. These are 5/8" street car rivets ... they are barely visible. Next time I will try Micomark's rivet decals. I have heard they are a little larger.

On this particular model, the doors had more warp than my first model. I may add some internal bracing to the 3D part that would be printed as part of the model. I say "may" as any addition material added to these parts just raises the cost. But, nobody likes to deal with warped parts .... especially me ... so I'll think of something. 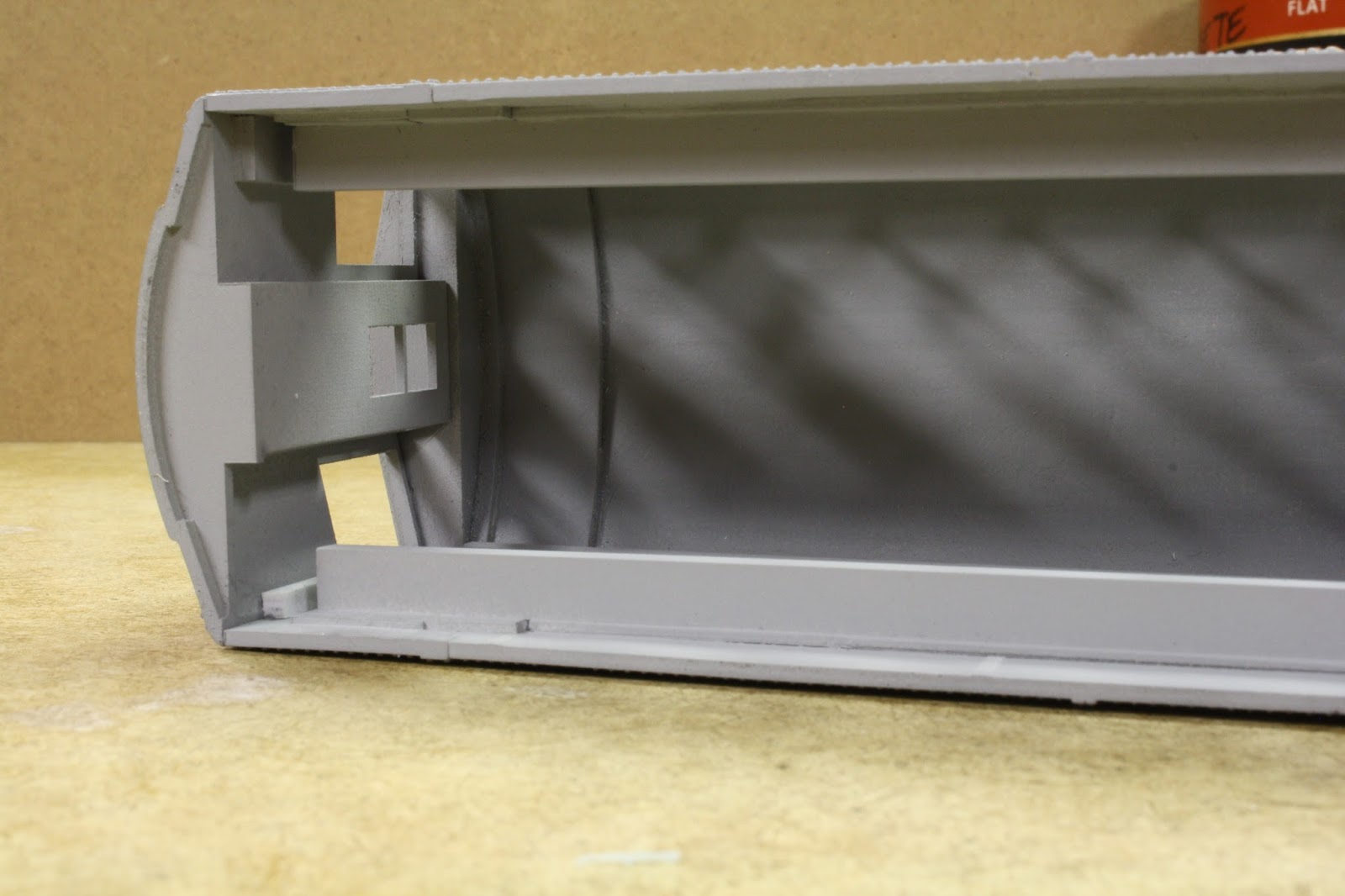 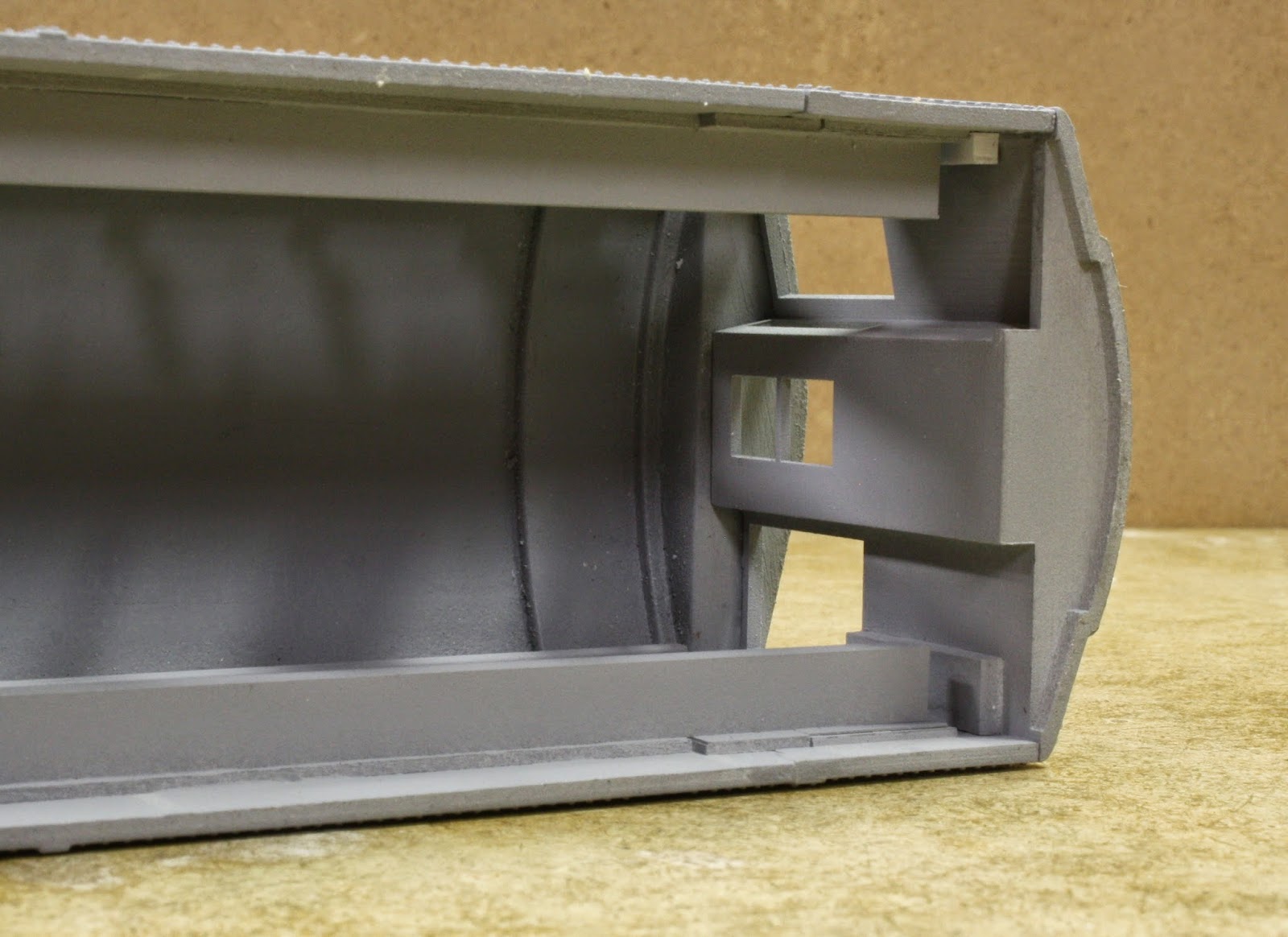 In the following, you can see that the side does have a slight inward bow. But, the side is flexible enough that once the floor is inserted, this can be eliminated. 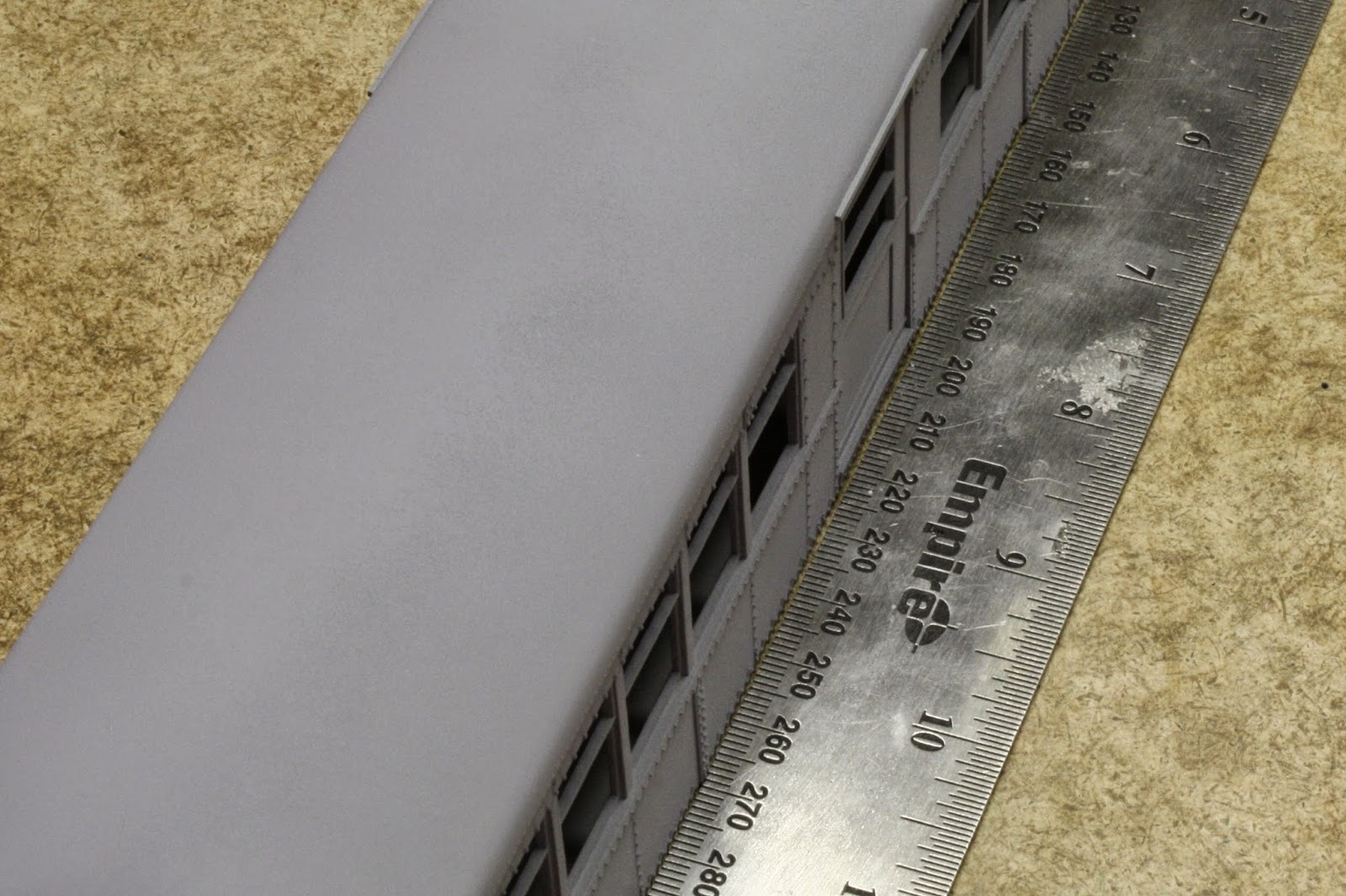 Why no photos of the modernized door style car? I'll go into that fiasco on part 2.