I have two 3D printing projects that I am currently working on: a model of a CRT 4000 series car and Metropolitan L style structure. 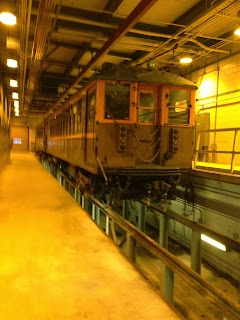 The goal is to make a 3D print that can be used as a master to make molds for casting. I chose CTA car # 4256 since it is a modernized 4000 series with the oval windows which I haven't seen in model form before. I thought that the oval windows would be the most challenging to reproduce.

With the 3D model stored in a file on the PC, it is hoped that changes to window styles and doors (for baldies and plushies, modernized, original rectangular windows, work cars, etc.) could be made in the 3D program rather easily then printed as desired.

The CRT/CTA 4000 series car isn't currently offered in O scale, although Q-Car Company resin shells appear infrequently on E-Bay. With this, the complexities of the end of the cars and precision needed for the oval windows makes 3D printing an option for modeling this car as some of the details are beyond my modeling ability.

I worked off the following plan for the 4000 series car, and not from an existing model. I don't want any hints or suggestions of piracy.

Within the limits of Shapeway's materials, I tried to stay as close to scale accuracy as possible, On the models below, all details and dimensions were taken from the above plan. Where I didn't have measurements, I extrapolated from known measurements.

(Note: there is some extra "roughness" to the photos. I've primed the parts with auto-primer and in some cases, coverage wasn't 100% which makes for a splotchy appearance, sanding hasn't been 100% completed and in some areas I forgot to remove all the sanding dust). 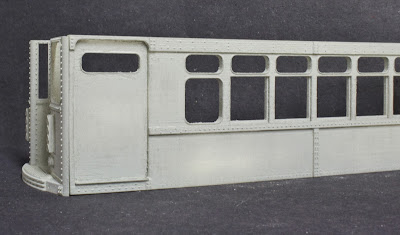 A view of the side: 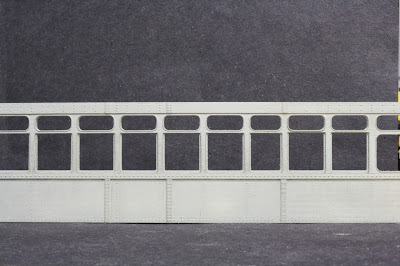 And of the ends: 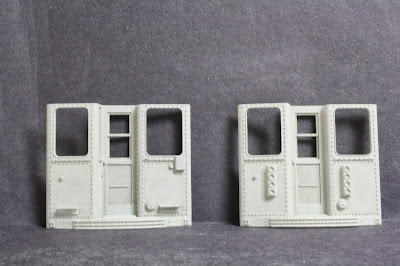 The ends, being printed in FUD, turned out acceptable. The rivet detail is very crisp, and the smallest details are legible. There is some "striping" (print lines from the 3D printer), but after one coat of primer, most of these lines can be sanded out. 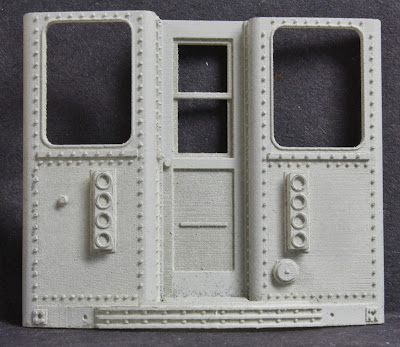 Note some roughness in the door panel and by the trolley wire spool. I haven't sanded those areas yet. But, the anti-climber detail turned out well, along with a floor mat that sits in front of the door. Again, the rivets are 3/4" in diameter and 3/4" high. I could probably reduce the height of the rivets to 1/2" in height. They are a bit large. 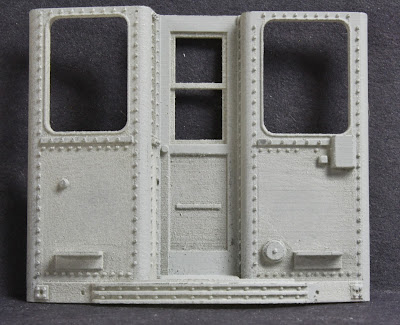 Again, I haven't sanded the door, and still need to sand around the bottom row of rivets.

However, with the ends, as there are some undercuts with the anti-climber, making a one piece mold probably wouldn't work. So, for production cars, the ends would probably need to be made from actual 3D print-outs.

The side was printed using Frosted Detail, as the size was too big for FUD. Also, I rushed this model to Shapeways to take advantage of a Black Friday discount, thereby resulting in a couple of errors on my 3D modeling. 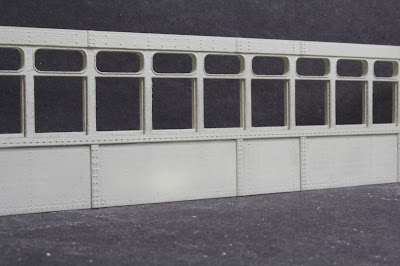 The car side still needs some work, some of which was caused by the errors I had with rushing my 3D model to Shapeways.

The rivet detail was done at 3/4" in diameter by 1/2" high, with the 1/2" in rivet height being very close to the limits of the Frosted Detail's resolution.

Also, with the larger flat surfaces of the side, the "striping" effect of the 3D printing process is much more pronounced. Note the following pictures:

The side is the same height as the ends. However, since propped up on a piece of construction paper, the side sits a little higher. Again, the roughness in the front is mostly caused by very splotch application of primer: 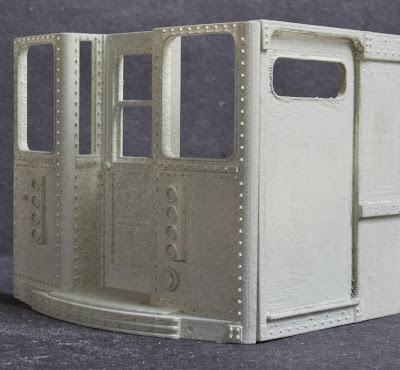 Note the area below in the red box. Some of the "striping" effect can be seen. The rest of the door has been sanded with two coats of primer. I didn't have an sanding sticks, so close-in sanding by the sides of the door wasn't possible. With better sanding, I think a smoother finish can be achieved. 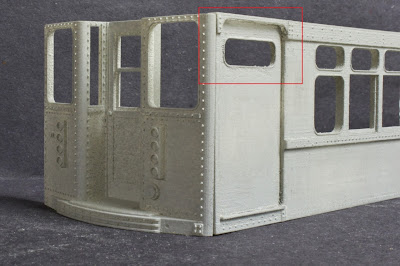 In the following picture, the rivet detail was basically sanded away. Again, I made the mistake of making the rivets only 1/2" high, which really didn't print too clearly. However, in areas such as the horizontal belt rail, the rivet detail was much more clear and legible. The rivets in the letter board are less legible, but still acceptable. The level of "striping" in the letter board, while visible in the below photo, isn't that noticeable in the real model. 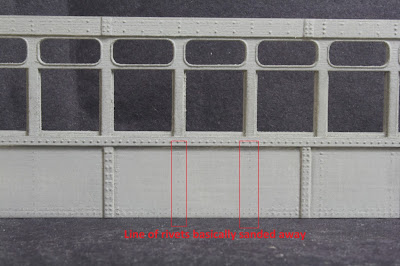 The following photo shows that the vertical line of rivets really seemed to exaggerate the "striping" effect on the flat areas. It also shows some of the 3D model errors that I had. The vertical rivets have been mostly sanded away, but "striping" was most evident right next to the rivet line. 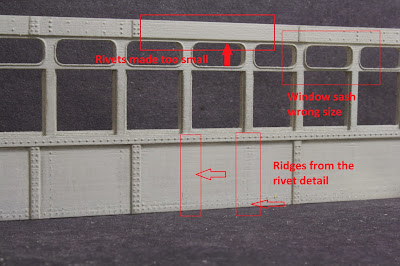 Another view of where rivet detail has caused "striping". In this area next to the door, I tried to add some rivets as they appear on the prototype. However, the flat surface definitely seems to exaggerate the lines. Note that the rivet detail on the horizontal belt rail and on the rivet detail underneath the door turn out acceptably well. 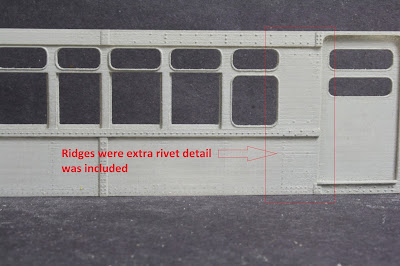 And some other views of the side: 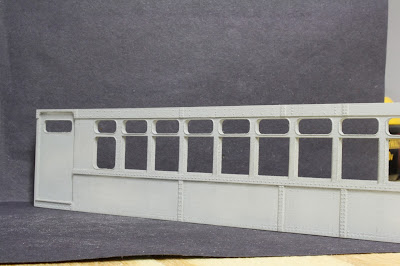 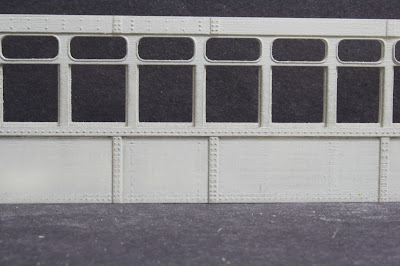 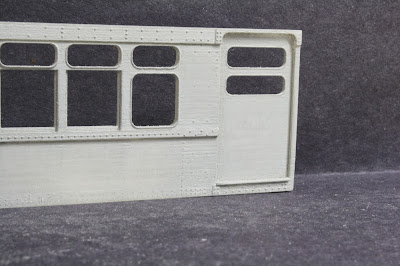 Overall, I think that the side is about 50% acceptable. The window detail turned out very well, and the gaskets around the oval windows are visible as they are 1/2" wide by 1/2" in height. Also, the precision of making consistent oval windows is a benefit.

However, I do need to work out the rivet detail on the bottom half of the car. I have two options:


Right now, I am undecided on which course of action to take. The goal of the 3D printing was to have the rivet detail included, but I'm not sure how well decals will be able to precisely replicate the original. With the 3D model, I can directly replicate the patterns as they appear on the plans.

In addition to the 4000 series car, I've also been working on creating a set of masters to replicate the Met L structure. The goal is to make a set of columns, cross beams and other details that can be used as a "system" to quickly mold, cast and create L structure in the Met style.

The column on the left is more prototypical accurate, but I like the thinner lattice style on the column on the left. I've since made a third 3D model that combines the best features of both column. These columns are basically "flat", so making a mold won't be an issue. Two sides will make a column along with a center "spacer" section, which I also have a 3D model for (not yet printed)/

Both columns were printed in FUD: 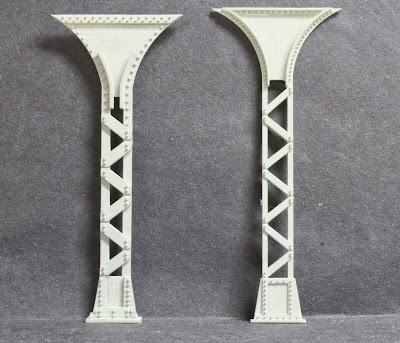 Some close up views: 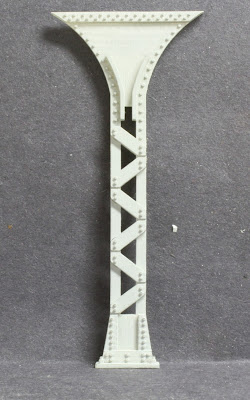 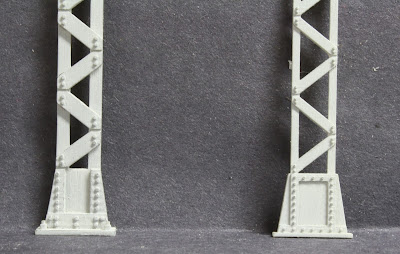 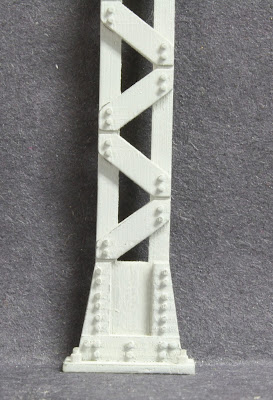 Note in the last picture the base has bolt detail that is vertically oriented. This has since been removed from the 3D model as making a mold of this would be difficult. A 3D model of the base has been made and would be printed and cast separately.

The L structure will be a complete system of 3D parts that can be printed and cast for easy replication. The amount of clean up and sanding on these smaller parts is significantly less than the 4000 car side.